Diesel and other items stolen at Avoncliff

Last weekend (5 or 6 February) a boat had 20 litres of diesel stolen from its tank at Avoncliff.  Recently a generator was lifted from a boat and two children’s bikes also stolen. Check your diesel tank, make sure your stuff is secured, and let us know if you see anything suspicious.

BW is becoming a charity – what does this mean for boaters?

Most of us will have heard by now that BW is going to become a “Third Sector” organisation, in other words a charity. At least, that is what the government and BW want. There are two important questions for boaters. First, what will it mean legally, and second, is it really a done deal?

Firstly, all the current legislation will still apply apart from some minor exceptions. The 1971, 1983 and 1995 British Waterways Acts and the 1962 and 1968 Transport Acts will apply as they do now. END_OF_DOCUMENT_TOKEN_TO_BE_REPLACED

We have submitted information on the situation, rights and needs of liveaboard boaters for the Core Strategies being drafted by Bath and NE Somerset and Wiltshire Councils.

What’s the Core Strategy? It’s the policy that guides local planning over the next 20 years or so. A boater met with one of the planning officers involved in drafting Wiltshire’s strategy, and a written response has gone to the public consultation on the BANES core strategy. This was done in response firstly to a proposal by Wiltshire’s Canal Officer that the Local Mooring Strategy should be written into its Core Strategy, and secondly because Bathampton and Claverton Parish Councils have responded to the BANES consultation with proposals that would have an adverse impact on liveaboard boaters. 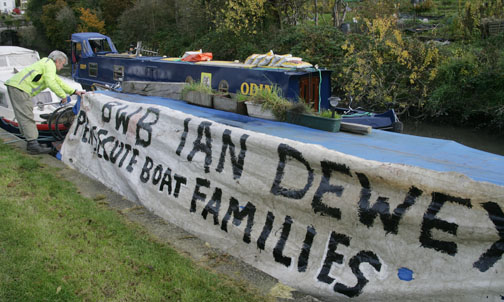 END_OF_DOCUMENT_TOKEN_TO_BE_REPLACED

There are thousands of us, and we’re not going to move into houses…

There’s going to be a census this year – it happens every 10 years. The census day is 27 March. We understand that census forms will be sent out by post this time, rather than being delivered by hand. If you have a postal address, especially if you are registered to vote, you will probably get a form. If you don’t have a postal address, you can call the census helpline on 0300 0201 101 from 4 March to get one, and you can arrange to have it sent to a postal address or possibly hand-delivered to you at a location of your choice. END_OF_DOCUMENT_TOKEN_TO_BE_REPLACED

A boater has recently drawn our attention to Halsbury’s Rules of English Law Volume 44. These are the rules judges and courts refer to when guidance is needed. Few lawyers know or use these rules when representing boaters.

Boaters need to know that the 1971, 1983 and 1995 British Waterways Acts are Local or Private Acts of Parliament. This is to be distinguished from a private member’s Bill/Act which is something entirely different.

Regarding the interpretation of Private Acts, Paragraph 1497 states:

This means that, where there is a dispute between the promoter (BW) and the individual, the court should interpret the legislation liberally in favour of the public, ie the defendant. In other words, when BW terminate a boat licence because the boater is not cruising according to BW’s interpretation of Section 17 (3) c ii (the Mooring Guidance for Continuous Cruisers), the court should rule that BW cannot enforce its own interpretation of the law. If you know anyone who is in this situation, make sure they know about this rule and use it in court!

The boater has recently written to BW asking whether BW takes full account of this when interpreting the 1995 Act against boaters, and if not, why not. He hasn’t had a reply yet…

Vote against a costly name change for BW

We received this message recently:

BW are running a survey to help choose its new name when it becomes a charity. Please can you urge your readers to complete the survey and tell BW/ the new charity not to change the name, as this will involve a substantial cost in re-branding signs, vehicles, etc.

You can complete the survey here

Two boaters attended an informal meeting on 3 February for people who have expressed their interest in becoming involved in the pilot Kennet and Avon Canal Partnership Board. Previously, there had been some doubt whether liveaboard boaters who had applied to the Kennet and Avon Canal Trust to be on the new Board would be welcome. However, liveaboard boaters made it clear that they should be represented on the new Board. It remains to be seen whether their presence at the meeting will lead to formal membership. END_OF_DOCUMENT_TOKEN_TO_BE_REPLACED

Recently BW has proposed changes in rules and regulations that affect roving canal traders such as coal and diesel boats and travelling shops. The main change BW wants to make is to increase their licence fee.

The present situation is that most of these traders pay £30-£40 over and above a normal boat licence fee on the basis that their business is what BW call ‘low intensity’ – they only make a small amount of profit. The new fee will see their business licence replaced with a normal licence and a new permit, and lots of extra regulations. This will see the fee increase to £156 above the normal licence fee. Their ability to trade and make a living on the waterways will be affected.

A new web site has been set up with the aim of giving a voice to the small traders on the canals of the United Kingdom.

There are many traders on the canal selling a diverse range of products such as traditional canalware, ropes, fenders, cheese, groceries, jewellery, fudge , cratch covers, boat names and embroidery.  The many trades afloat serve the boating community, bring diversity and enhance the public’s enjoyment of the waterways. We wish them the best of luck in challenging this licence fee increase.

You are currently browsing the Kennet and Avon Boating Community Website archives for February 2011.