Once upon a time there was a farmer, let’s call him Richard Head. Farmer Head was in the lucky position of having a short section of disused canal on his land. There was also a bunch of Old Men with long beards who thought this canal was the Best Thing in the World and wanted to see it restored to its former glory.

So lots of the Old Men and some of their younger helpers went to Farmer Head and asked whether they could dig his canal out and fill it with water. Farmer Head said “yes, of course”. So they did this and a piece of canal that had stood empty for 100 years was dug out, repuddled and allowed to naturally fill with water.

A True Triumph thought the Old Men with smiles all around and sat around and drank much cider with Farmer Head until their beards turned yellow and their cheeks turned red.

After much merriment and fun the Old Men got together with Farmer Head and said ‘let’s run a festival here, with many bands and revels and dancing and food and drink. It will bring fame to our canal and much joy to many people”.

So they all agreed to have a Canal Festival on 4th July and everyone was very happy at the thought. The Old Men rushed around – at least they appeared to move a little faster than usual – making plans and preparations saying to themselves “if we can build a canal, a party will be easy”.  One of the Old Men was a Disc Jockey and arranged many bands to come from far and wide to play at the festival. Posters were made and put up all around the villages and much use was made of Ye Olde Facebook and other such ear trumpets.

One day, Farmer Dick Head, who was known in the village for being a rapacious and greedy bastard, who had made the Old Men think he was a Fine Fellow, revealed his True Intentions. He threw them off his land and said “this festival is mine now and I’ll keep all the money”. I don’t know but he probably laughed like this too “Muu Ha Ha”. “people will still come and pay me money and I will Keep It All”.

So if anyone was thinking of going to the Somerset Coal Canal Festival at Radford Mill on July 4th….. Please don’t. 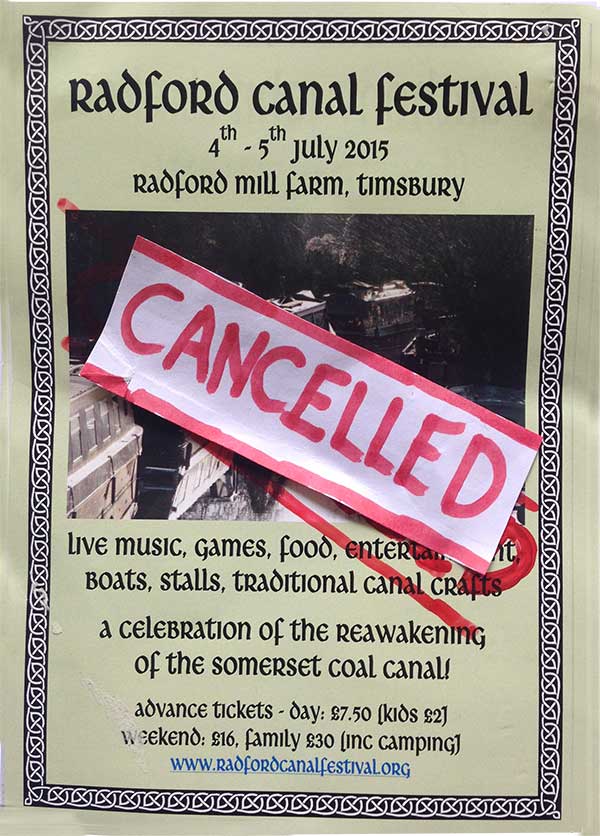 This entry was posted on Wednesday, June 24th, 2015 at 1:26 pm and is filed under Events. You can follow any responses to this entry through the RSS 2.0 feed. You can skip to the end and leave a response. Pinging is currently not allowed.