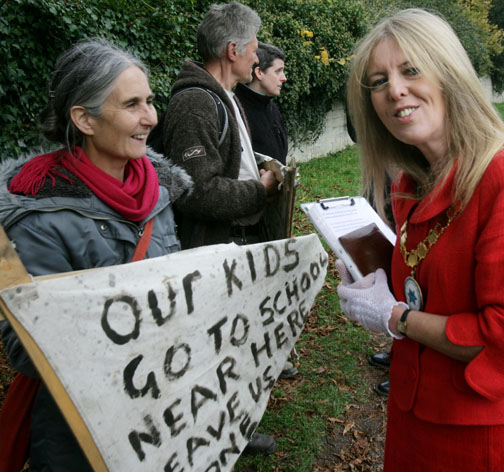 The beautiful sundial constructed to commemorate the K&A 200th anniversary was unveiled on 30 October at lock 10 on the Widcombe flight in Bath. Boaters attended the ceremony in order to hand out leaflets informing the public that BW’s unlawful new policies will make liveaboard boaters homeless. Staying a respectable distance from the sundial, boaters explained the situation to people who wanted to know more. Banners saying “British Waterways’ undemocratic, unlawful new policies will make boater families homeless” and “BWB, Ian Dewey, leave us alone” were hung on boats. The Bath Chronicle has covered the protest on page 43 of its 4 November edition. Those receiving leaflets and asking for more information included the Mayor of Bath and the Leader of BANES Council Sarah Bevan. The protest was a surprise to most of the participants in the unveiling, but was received in the spirit it was conducted – with politeness and good humour.

Here is the text of the leaflet the boaters handed out:

The right to cruise the canals without a permanent mooring for your boat is enshrined in the 1995 British Waterways Act, which allows boats to stay for up to 14 days in any one place or longer if the circumstances warrant it. British Waterways (BW) has a long history of trying to enforce additional rules for boats without moorings which go beyond its legal powers. For example, since 2004 BW has told these boats they should be on a “progressive journey” around the entire canal system, even though the law allows boaters to follow a cruising pattern of their own choice subject to the 14-day rule. When Parliament debated the law before 1995 it specifically rejected the idea of requiring these boats to make a progressive journey.

Now, BW want to introduce a lot more rules which are also above and beyond what the law requires, such as “no return within” time limits; shorter time limits, and a “transient mooring permit” where boaters will be asked to pay to do what the law already allows them to do. These new rules are likely to be accompanied by a reduction in the amount of space where boats can tie up for 14 days.

If boaters obey these new rules, they will travel so far away from their jobs and/or their childrens’ schools that they may be forced to choose between giving up their jobs and taking their children out of school, or giving up their homes. Many would have to register as homeless if they moved off their boats. They would also be unable to access healthcare and would be denied the social participation most of us take for granted in a civilised society.

If boat dwellers do not comply with rules that make it impossible to remain in their jobs or send their children to school, BW is likely to terminate their boat licences. BW has the legal power to seize unlicensed boats so not only would they become homeless, they would lose the only asset that they own. Yes, you did read that correctly – BW will take their boats away for not complying with rules that are beyond what the law requires.

To implement its new rules on the western Kennet and Avon canal, BW has introduced a local mooring strategy, run by a steering group of representatives in which boaters are outnumbered by other groups who do not risk homelessness as a result of the new rules. BW claims it needs the new rules to control mooring congestion. Yet BW does not use the power it already has – the 14-day rule – to regulate mooring. This power is clearly set out in law – there is no question about its legality. We do not understand why BW wishes to invent and enforce new rules which are not contained in its legal powers, rather than use the existing law, which we are prepared to comply with.

BW says that living on boats has always been part of waterway life. Indeed, the colourful and interesting boats belonging to liveaboard families, pensioners and working people enhance the attraction of the canal for visitors and provide all-year-round safety and security on the towpath, especially for lone women joggers and cyclists. Liveaboard boaters have rescued people and dogs from the ice, have helped people who have fallen into the canal, and have provided assistance to holiday boaters unfamiliar with boat handling.

If you are concerned that boating families, single people and pensioners will be made homeless, write to Robin Evans, Chief Executive, British Waterways, 64 Clarendon Rd, Watford WD17 1DA or email robin.evans@britishwaterways.co.uk

It is also here for you to download and print if you wish to hand out the leaflets anywhere yourself.  Boaters’ Leaflet

This entry was posted on Friday, November 5th, 2010 at 8:10 pm and is filed under Continuous Cruisers, Events, News. You can follow any responses to this entry through the RSS 2.0 feed. You can leave a response, or trackback from your own site.