On 16th April 2016, over 200 boat dwellers including a group from the K&A marched to Downing Street to hand in a petition against CRT’s policy that threatens boaters without a home mooring with restricted licences and ultimately eviction from CRT waterways. Along with protesting against evictions, they were demonstrating for the need for more facilities such as water taps, rubbish disposal, sewage disposal and mooring rings where the towpath has been concreted over. 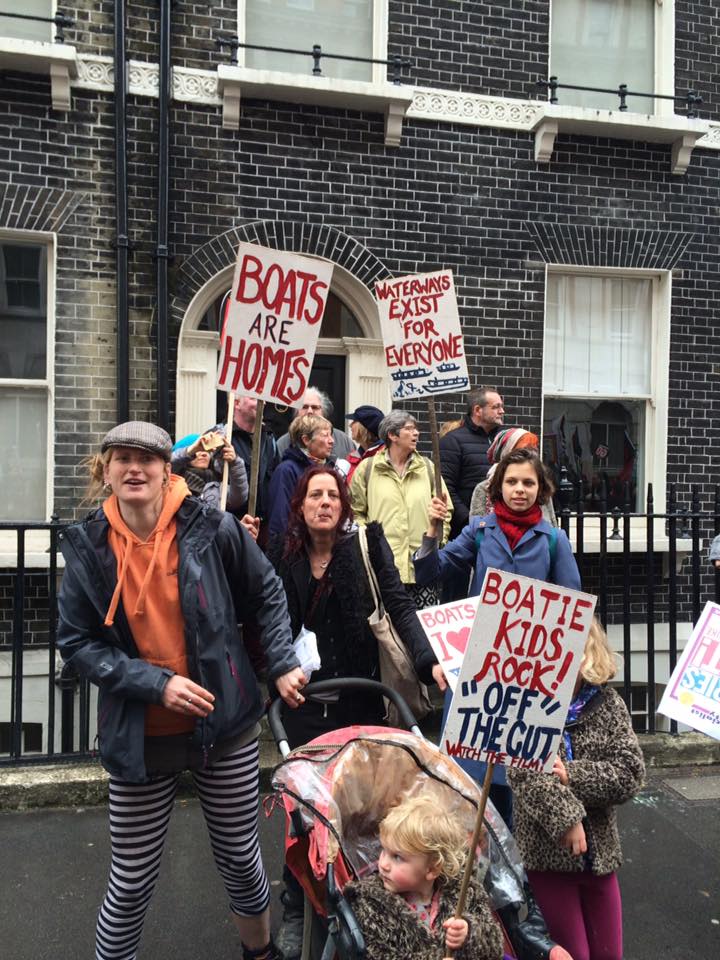 K&A boaters and their children on the march

The march attracted considerable press interest including an article on the BBC News web site; on Radio 4’s Broadcasting House on 17th April and on BBC Wiltshire’s Breakfast Show on 18th April, in which K&A boaters were featured.

The boaters marched through central London with the March for Health, Homes, Jobs and Education and then carried on to Downing Street to hand in the petition, “Boats are Homes”,  that has been signed by nearly 29,000 people. The petition asks the government to put pressure on CRT to end this policy and stop the unnecessary eviction of boaters.

There is a growing number of cases where boat dwellers are being threatened with eviction by CRT. Since the policy was introduced (on 1st May 2015), to March 2016, 1,049 boats without a home mooring were offered a restricted licence (19% of the continuous cruising community) and 12% of the entire community took up these restricted licences. On 10th March 2016 CRT confirmed that it would no longer issue restricted licences for so-called “non-compliance” and would instead withdraw licences leading to the boater losing their home.

The Boats are Homes march was organised by the National Bargee Travellers Association (NBTA). A spokesperson for the NBTA said:

“CRT doesn’t have a set distance or way we must move. They deal with us inconsistently, refuse and restrict our licences without giving us clear reasons and threaten people with eviction.”

“However, today we have shown that we will stand together. We will not be picked off one by one. We are fighting for our homes and our way of life.”

This entry was posted on Wednesday, April 20th, 2016 at 5:54 pm and is filed under News. You can follow any responses to this entry through the RSS 2.0 feed. You can skip to the end and leave a response. Pinging is currently not allowed.