CRT announced today (27th October) that the Caen Hill flight will be open while CRT repair the towpath between locks 48 and 49 but lock 50 will be padlocked at 4pm each day until repairs are complete to prevent further vandalism. CRT believes that the damage was caused deliberately by someone opening the paddles. There is no mooring between locks 47 and 50 and the towpath is closed until further notice. 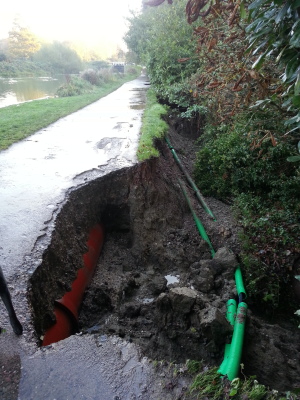 In what appears to be another act of vandalism, CRT has closed the K&A between Wootton Rivers bottom lock and Crofton basin after the paddles at locks 57 and 58 were also left open overnight. This will remain closed until water levels recover. Many boats moored in the Long Pound, at Wootton Rivers and Crofton have been grounded and are listing badly.

The photographs show the damage to the towpath between locks 48 and 49. 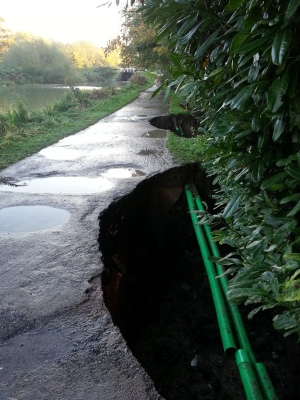 This entry was posted on Tuesday, October 27th, 2015 at 7:21 pm and is filed under News. You can follow any responses to this entry through the RSS 2.0 feed. You can skip to the end and leave a response. Pinging is currently not allowed.