Vaughan Welch, one of the four private boater representatives elected to the CRT Council, has recently written an article encouraging IWA members to spy on boaters who comply with Section 17 3 c ii of the 1995 British Waterways Act. In an article in ‘Navigation’, the newsletter of the Inland Waterways Association (IWA) West Midlands branch Mr Welch, also the Region Chairman of the West Midlands IWA branch, said:

“CRT… are probably unaware of those who try to hide in the numerous West Midlands canals like the BCN and its neighbouring waterways. With a considerable mileage and easy access to public transport these waterways are ideal for those who choose this way of life by hiding from officialdom cruising a regular circuit and returning to their favoured mooring spots on a regular basis. This breaches the conditions for a continuous cruiser … Mindful that genuine boaters are unwittingly supporting these unsocial activities… I would encourage you to report, with substantiating evidence if you have it, to CRT all those who are obviously bending the rules to the detriment of other boaters”.

It is perfectly legitimate for boaters without home moorings to follow the travel pattern Mr Welch describes; Section 17 3 c ii of the 1995 British Waterways Act does not specify a minimum distance or prescribe any particular travel pattern. The BCN and its neighbours are a dense network of hundreds of miles of canals. It beggars belief that anyone thinks that travelling a ‘considerable mileage’ on this extensive network of waterways is not bona fide use of a boat for navigation. The IWA has lost the plot completely!

Of course,if boaters are staying longer than 14 days in one place without it being reasonable in the circumstances, they are on the wrong side of the law. But that is a civil matter between the boater and CRT, and it is nobody else’s business. It is not a criminal offence, so witnesses are not obliged to report it.

Vaughan Welch also accuses boaters without home moorings of avoiding Council Tax. This is completely inaccurate. Council Tax is levied on domestic property and so cannot be levied on a boat, because a boat on its own without a mooring is a chattel in law and not property, even if it is somebody’s home. Paying Council Tax is not a requirement for using local authority services; many people do not pay Council Tax and yet still use local services, because they qualify for Council Tax Benefit.

If you see anyone who appears to be watching your boat, photographing it or taking its number who is not a CRT employee, they could be committing an offence under the Protection from Harassment Act 1997. This offence is often referred to as “stalking”. You can report suspicious activity to the Police on 101; calls are free.

You can read the full article in the Autumn 2012 issue of ‘Navigation’ below. 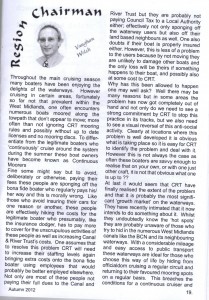 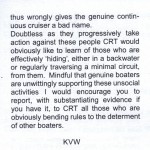 This entry was posted on Sunday, January 13th, 2013 at 7:17 pm and is filed under Continuous Cruisers, Mooring, News, Opinion. You can follow any responses to this entry through the RSS 2.0 feed. You can skip to the end and leave a response. Pinging is currently not allowed.