CRT has reneged on the agreement that it made in May 2019 with boaters and Wadworths Brewery to re-instate the boaters’ rubbish bins at the Bridge Inn, Horton, near Devizes.

In December 2019, fourteen boaters sent a complaint to Acting Regional Director Jon Horsfall that no progress had been made on constructing the proposed new bin site at the pub and also that the water tap at the Bridge Inn had been out of service since November 2019.

Mr Horsfall’s reply, sent after Christmas, stated that “Whilst we accept the closure of the Horton [bin] site creates limited inconvenience to some customers, we do not intend to reinstate it.”

Despite Mr Horsfall’s assurances that provision of a boaters’ water supply at the pub would continue, the tap is still out of action at the time of writing. The fourteen boaters who complained are considering whether to take the matter further with the newly appointed Regional Director Mark Evans, who until 2018 was the manager of the K&A.

In 2018 – 2019, boaters held two demonstrations, made numerous complaints, handed in a 405-signature petition to CRT and Wadworths, and attended a number of meetings with brewery and CRT managers, resulting in the agreement to construct a new bin compound.

The text of the December 2019 complaint and Jon Horsfall’s reply are below:

This is a formal complaint in line with the CRT complaints procedure. We are not satisfied with CRT’s lack of progress in re-instating the boaters’ rubbish bins and ensuring the constant availability of the boaters’ potable water supply at the Bridge Inn, Horton, Wiltshire.

Two meetings took place between Wadworths brewery, CRT and boaters on 3rd January 2019 at Wadworths Brewery and 14th May 2019 at the Bridge Inn. At these meetings a decision was made to re-instate the boaters’ rubbish bins in a different and less visible location at the Bridge Inn. Implementing this relies on CRT including the new site in its bin collection schedule.

The people present at these meetings included Chris Welham, Chief Executive of Wadworths; Richard Thomas, former Regional Director of CRT, and the landlord of the Bridge Inn Matt Smith.

Having rubbish bins and a functioning water tap at Horton are an essential facility in a part of the Kennet and Avon Canal where facilities are already inadequate. Boaters have recently lost rubbish disposal at the Barge Inn, Honey Street; the bins at the very busy Devizes Wharf were removed for some years and only replaced with bins of much reduced capacity. The bins at Lock 44 are not accessible by vehicle (so boaters seeking to take their rubbish to the bin compound by vehicle cannot access the site) and once at the site the signage implies that the bins are reserved for the permanent moorings.

We note that CRT’s strategy since September 2017 has been to develop the waterways to promote the “health and well-being (specifically mental health)” of waterway users. Article 2.1 of the CRT Charitable Objects states that it is required: “To preserve, protect, operate and manage inland waterways for public benefit: for navigation (including navigation by boats that are also used for human habitation); and … for recreation or other leisure-time pursuits of the public in the interest of their health and social welfare”. In failing to protect the public health of boaters by providing or ensuring the provision of adequate rubbish disposal facilities, CRT is in breach of its Charitable Objects.

To remedy our complaint please do the following:

1. Immdeiately start work with Wadworth’s Brewery and Matt Smith to re-instate the boaters’ rubbish bins at the Bridge Inn on the former campsite land that was inspected and agreed in the meeting on 14th May 2019.

2. Alter the contract with Biffa to include collections from the Bridge Inn once the bin site has been built.

3. Ensure that the water tap continues to be available to boaters by immediately paying the existing water bill and paying all subsequent bills immediately the invoice is received from the Bridge Inn.

3. Install a new water supply under the control and ownership of CRT.

Thank you. We look forward to your reply within 15 working days. 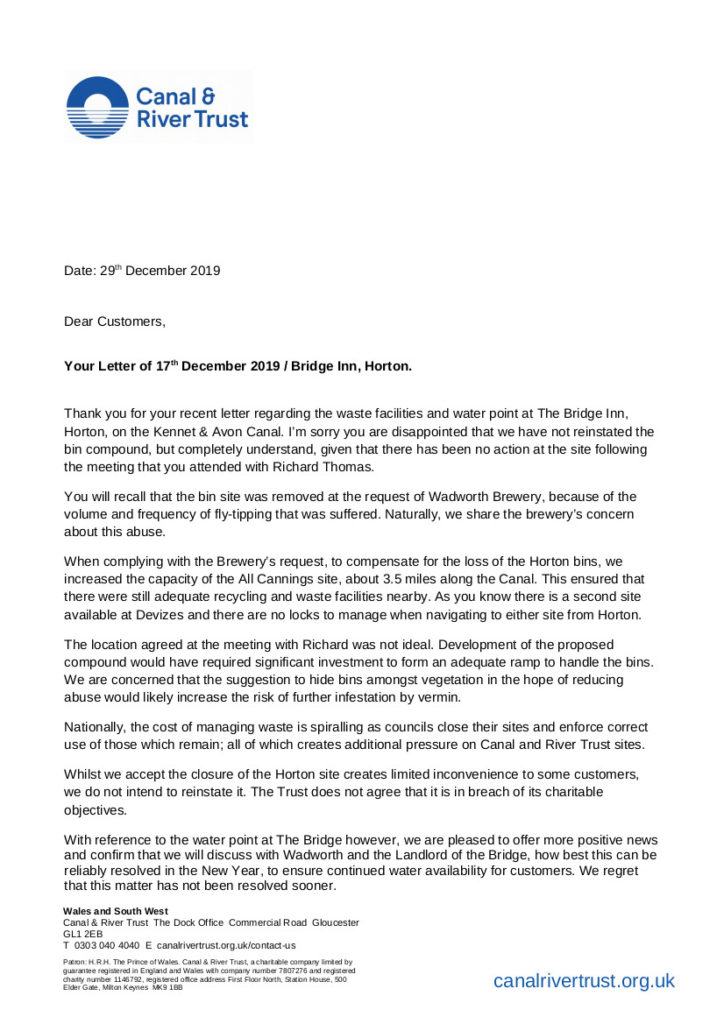 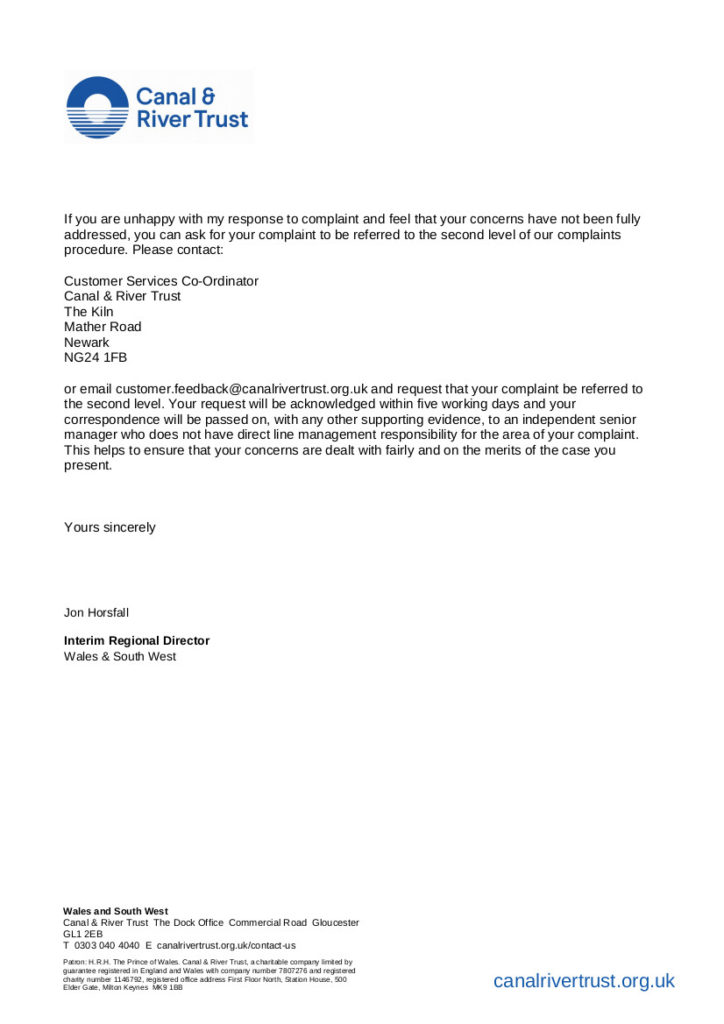 This entry was posted on Monday, January 20th, 2020 at 7:18 pm and is filed under News. You can follow any responses to this entry through the RSS 2.0 feed. You can skip to the end and leave a response. Pinging is currently not allowed.