Alzheimer’s Support, a charity that provides services to people with dementia in Wiltshire, is marking its 25th anniversary with a sponsored fundraising walk along the K&A from Bath to Pewsey this weekend. The walk starts at Bath tomorrow; on Saturday May 23rd the walkers will cover Bradford on Avon to Seend, on Sunday 24th Seend to Devizes and on Bank Holiday Monday, Devizes to Pewsey. There will also be a Family Fun Day at Devizes Wharf from 11am to 3pm on Sunday.

Almost half the population has a relative or close friend with dementia. It is an illness where parts of the brain stop functioning, causing difficulties in thinking clearly, remembering, communicating and doing everyday tasks. There are several different types of the illness but the effect on people is similar.

About 1 in 3 people over 65 will develop some form of dementia, and the number of younger people with the condition is growing. People are living longer, which means the number of people with the condition is going to increase. This will inevitably include liveaboard boaters. People with dementia and their carers are often isolated and not included in the community; they struggle with everyday tasks and they may give up social and other activities because they are not supported to stay involved.

Charities like Alzheimer’s Support are working to make the whole community more dementia friendly. If you would like to find out more about how a relative or friend with dementia can be supported to carry on living in their own home as normally as possible, you can contact the charity on 01225 776481 or see www.alzheimerswiltshire.org.uk or the Alzheimer’s Society www.alzheimers.org.uk 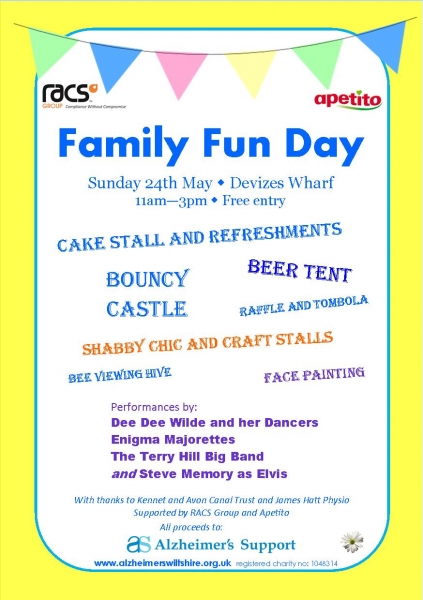 This entry was posted on Thursday, May 21st, 2015 at 2:13 pm and is filed under Health, News. You can follow any responses to this entry through the RSS 2.0 feed. You can skip to the end and leave a response. Pinging is currently not allowed.