The K&A Users Forum will take place in the Corn Exchange, Market Place, Devizes SN10 1HS on Tuesday 24th May 2016 at 6.30pm to 8.30pm (doors open 6pm). This is an open meeting and all waterway users are invited.

Recent user forums have been attended by a number of liveaboard boaters, which has enabled us to raise issues that concern us and also helped to improve the relationship between liveaboard boaters and other waterway users. This would be an especially good opportunity to further raise and discuss issues about boaters’ facilities on the K&A with the K&A Manager Mark Evans, who is responsible for facilities on the K&A. Some of us might like to express appreciation for the newly installed water tap at Avoncliff: this was installed mainly so that boats would not have to go up and down Bradford lock to fill up with drinking water, so it’s a win-win result for boaters and CRT as it is expected to reduce lockages through Bradford, one of the busiest locks on the waterways.

For more information about the meeting, and to let CRT know you are going, contact Alison Jordan on 01380 737907, email alison.jordan@canalrivertrust.org.uk. 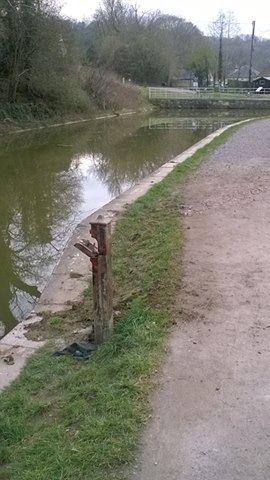 The new water tap at Avoncliff

This entry was posted on Thursday, May 19th, 2016 at 8:56 pm and is filed under News. You can follow any responses to this entry through the RSS 2.0 feed. You can skip to the end and leave a response. Pinging is currently not allowed.