After a delay of around 15 months BW has finally coughed up some information about changes to its “continuous cruising” enforcement procedure. A Freedom of Information request was made in October 2010 after changes to the procedure were mentioned in a BW briefing for User Group meetings. The FOI request was refused; in June 2011 the boater referred the matter to the Information Commissioner after BW failed to respond to a request for a review of its refusal to provide the information. Below are the new Continuous Cruising Flowchart and Continuous Cruising  Timeline. (The original FOI request is at the end of this article.) The main changes are the inclusion of the “Pre-CC1” letter and the blocking of any attempt to relicense a boat that has had its licence revoked. The other issue of note is that boat sightings over a period of 9 months are being used to judge whether or not a boater is complying with Section 17 3 c ii of the 1995 British Waterways Act. This is contrary to what Parliament intended – according to the evidence BW submitted to the Commons Select Committee that drafted the 1995 Act, boat movements were to be looked at when the licence was due for renewal, not 3 months before that date. Yet another aspect of the “Continuous Cruising” Procedure that is unlawful. The entire enforcement procedure is based on whether a boat’s movements comply with the Guidance for Boaters Without a Home Mooring, which sets movement requirements that are beyond what is specified in section 17 3 c ii. 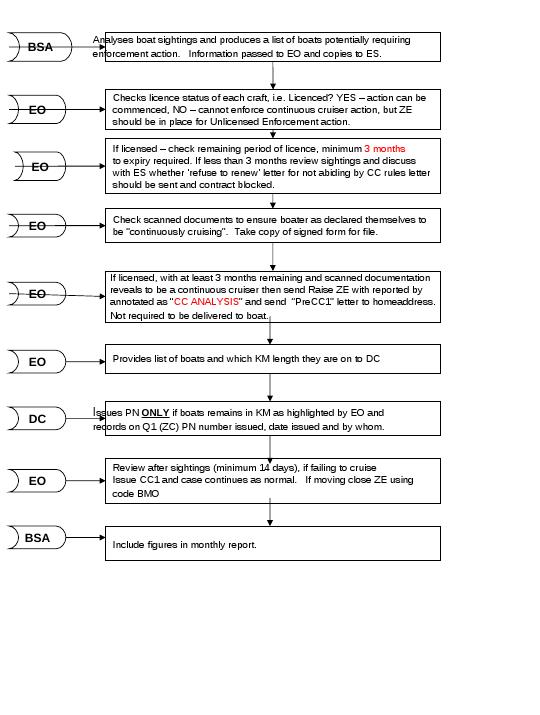 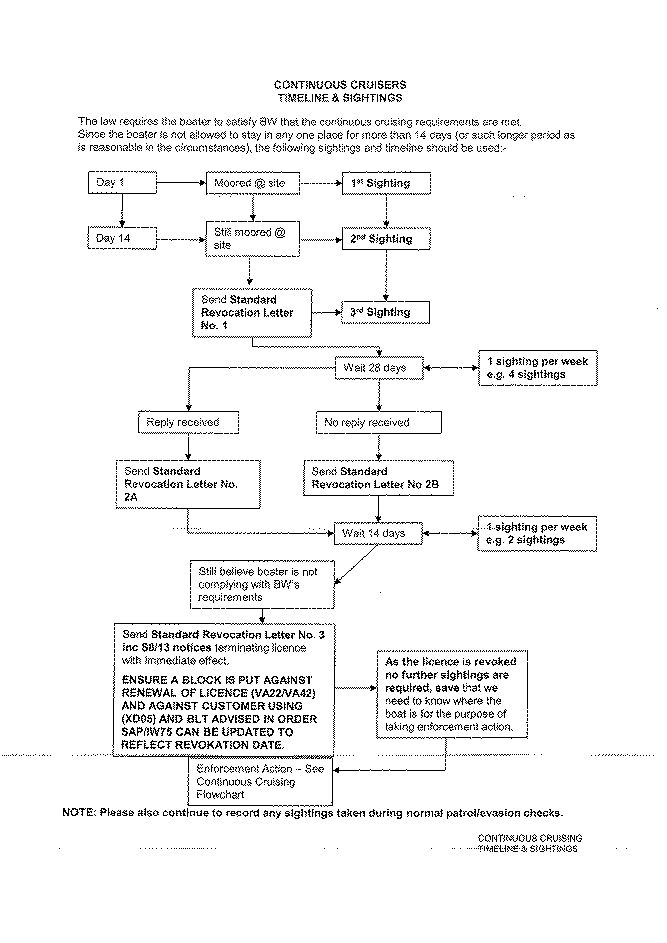 1.  The minutes of all meetings during 2010 where these changes to the continuous cruising process were discussed;

2. all briefings, procedural guidance and instructions issued to staff during 2010 regarding these changes to the continuous cruising process.

BW provided the total number of boat sightings and a supplementary request was made which was refused for:

1. the date;
2. the name of the waterway;
3. the total number of sightings made on that date on that waterway,and
4. a breakdown of the sightings for each day on each waterway into continuously cruising boats, boats with home moorings, hire/share boats and trading boats.

This is BW’s final response after the Information Commissioner intervened:

This is the Information Commissioner’s decision:

Your FOIA complaint about British Waterways – an update

I am writing from the Information Commissioner’s Office about the complaint that you have made about British Waterways. I can confirm that I have been allocated this complaint as case officer and have already corresponded with British Waterways in order to ensure that it complied with its obligations in this case.

This email has two purposes. The first is to provide an update and the Commissioner’s preliminary view. The second is to provide your options about how this case will continue and ask you to choose one.

The main problem that you reported was British Waterways’ failure to conduct an internal review in a reasonable time period and its failure to answer some of your requests at all.

I have now told British Waterways what it should have done and it has now issued an appropriate internal review. A copy of that review is attached for your ease of reference.
I consider the internal review response accords with what is expected and complies substantively with its obligations under the Act.

I can also confirm that my preliminary view is that it has applied section 31 appropriately to the information identified in part [4] of the request. Coincidentally, the Commissioner considered a case for subset of the information you requested in part [4] recently. He found that the exemption was applied appropriately by British Waterways. A link to a copy of that Decision Notice can be found below:

For your information, British Waterways originally tried to apply section 31 to the information requests in part [3] and it changed its mind after my involvement. It also ensured that it provided the full figures for both years.

However, procedurally British Waterways have acted well below what is expected by the Commissioner. In particular, it has taken:

§   Its refusal notice lacked appropriate detail – although this was remedied in its internal review; and

I can confirm that I have referred these matters to our enforcement team and they will continue to monitor British Waterways. The enforcement team is concerned about patterns of non-compliance and do not correspond with individual complainants. However, I consider it important that they are aware of these problems to influence their future work.

There are three possible options that can be taken in this case. They are noted below:

1.     Your first option is to choose to withdraw this complaint at this stage. You may decide in light of receiving the information you are entitled to that this particular case can be closed. If you choose this option, I will ensure that the procedural breaches are recorded on our system and that you receive a copy of the letter that I write to the British Waterways advising it to improve.  If you choose to withdraw your complaint, you cannot appeal to the First Tier Tribunal (Information Rights);

2.      Your second option is to ask for the Commissioner to come to a formal decision about the unacceptable delays you experienced in this case. The advantage of this would be that you would receive independent verification about where the British Waterways fell short and this would be a public document; or

3.     You third option is to elect for a formal decision notice about both the delays and about British Waterways withholding the information under section 31. If so, I would appreciate that you provide your arguments about why you consider that the Decision Notice about similar information is not correct. I would like you to do this to ensure that I address any concerns that you have in the formal decision notice.  This option will take more time than the first two.

I look forward to hearing from you. You can respond by replying by post:
The Information Commissioner’s Office
Wycliffe House
Water Lane
Wilmslow
Cheshire SK9 5AF

This entry was posted on Monday, January 30th, 2012 at 6:43 pm and is filed under A-Featured Articles, BW Policy News and FOI Act Requests, Continuous Cruisers, News. You can follow any responses to this entry through the RSS 2.0 feed. You can leave a response, or trackback from your own site.