A boater has carried out an evaluation of the statistics on boat movement in CRT’s first quarterly report on the K&A Interim 12-month Local Plan. Our correspondent reports:

There is no stated methodology regarding how the data on boat movements was collected and when it was collected. It is not stated whether boat sightings taken by volunteers at visitor moorings are included. If so, it is not stated whether they have been cross-referenced with the sightings collected by the paid data checkers/ licensing officers. If not, there is no explanation why these have not been included.

The report targets 302 boats, but although it states that 302 boats have not been sighted outside the plan area, the report does not explain the criteria for choosing these boats out of nearly 1300 boats sighted within the plan area. For a report to be respectable, it must be objective; that means it must include all the available data. If some data is excluded without a proper explanation, the report is open to allegations of subjectivity.

For example, the report shows that 18 boats have only been sighted in one neighbourhood. On the face of it, you would be forgiven for believing that 18 boats have not moved in three months. However, one of those boats is stated as having also been sighted out of the 21-mile area, therefore the headline is reduced to 17. However, is the figure really 17? We are not told how many times each of the 17 boats was sighted. It could be read that they have all been sighted 6 times but what if one boat has been spotted only twice? It becomes a fact that the boat has been moving but we are denied this information; CRT has it and should divulge it.

The report informs us that a number of boats have been given leave to extend their stay but this has not been taken into account. CRT cannot list a boat as not moving when it has given permission for the boat to stay in one place.

Simple arithmetic demonstrates that CRT has only used the data from the boat sightings taken by its employees. As stated above, the report should explain the methodology rather than leaving it to the reader to make this calculation. The data from the volunteer rangers has not been cross-referenced. If the volunteer rangers’ data is considered acceptable for the purpose of trying to move boats off visitor moorings and trying to collect “extended stay charges” then clearly it is accurate enough to show that boats have been sighted somewhere. The odds are very high that a boat missed out in the fortnightly boat check will have been sighted occasionally by a volunteer at a visitor or facilities mooring even if it was only there to empty an Elsan. 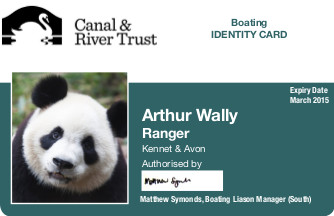 Without access to all the available data, no-one can draw a conclusion regarding boat movements. If CRT is not prepared to use all the data, it is easy to draw the conclusion that it has a reason not to do so. We can speculate what that reason is but what is clear is that the report as it stands is meaningless.

CRT patrols the River Avon at the end of each month therefore a boat that navigates between Bath and Bristol is very likely not to be sighted at all except when it is in Bath or further east, giving rise to an allegation of non-movement when the boat may have left CRT waters and thus not be subject to the K&A Plan at all for the time it is out of CRT’s jurisdiction.

A retired professor of statistics informed the NABO Council member for legal affairs that taking boat sightings at 14 day intervals of boats that move at intervals of up to 14 days means that the statistical accuracy is likely to be zero.

This entry was posted on Wednesday, October 1st, 2014 at 9:42 pm and is filed under Continuous Cruisers. You can follow any responses to this entry through the RSS 2.0 feed. You can skip to the end and leave a response. Pinging is currently not allowed.