Although holidaying in Holland, Matthew Symonds made time to issue his first denial via Twitter that he called liveaboard boater ‘gits’. 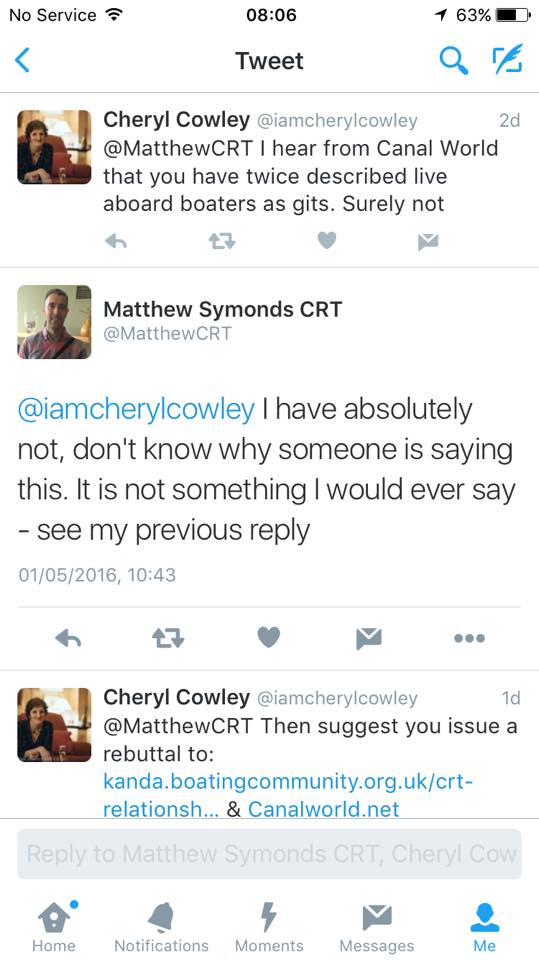 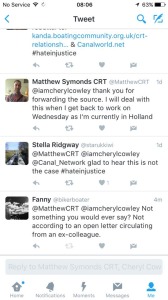 So Wednesday may be an interesting day for Matthew as he tries to manage the Twittersphere, his bosses and the calls for him to rethink his position.

Whereas we appreciate that he may not be enamoured with all sections of the boating community, we all know boaters we would gleefully describe as ‘gits’ or worse, we contend that it is beholden on someone with the title Relationship, Policy and Strategy Manager to have a bit more empathy for those whose lives he is making so miserable.

Would it be too much to ask to have a Relationship Manager who actually understands the pressures on liveaboard boaters? To have someone who makes it his mission to make relations between them and CRT smoother? To have someone who concentrates on facilities and facilitation rather than conflict and threats?

A glance at his public profile shows a man who will be no stranger to prejudice who publically espounds left wing views. What went wrong Matthew?

Did you think that you’d make your mark from an unassailable position of power?

You, sir, are as every bit as bad as the Tory overlords you claim you oppose.

And now you’ve called an ex-colleague a liar.

This entry was posted on Tuesday, May 3rd, 2016 at 8:29 am and is filed under News. You can follow any responses to this entry through the RSS 2.0 feed. You can skip to the end and leave a response. Pinging is currently not allowed.