Following the handing in of the Boats are Homes petition to Prime Minister David Cameron and the Boats are Homes march, boaters are invited to join a protest at Canal & River Trust offices in Leeds and its Milton Keynes HQ at 12.00 noon on Tuesday 10th May 2016. Lifts may be available from the K&A to Milton Keynes – please contact 07928 078208 or info@boatingcommunity.org.uk for more details about transport.

The protest will take place at Station House, 500 Elder Gate, Milton Keynes MK9 1BB and Fearns Wharf, Neptune Street, Leeds LS9 8PB to call for No evictions of Boat Dwellers! Full 12-month boat licences for all! Let boat children go to school! The protest is being organised by the National Bargee Travellers Association. For more information about the protest please contact secretariat@bargee-traveller.org.uk or 0118 321 4128 or see www.bargee-traveller.org.uk. 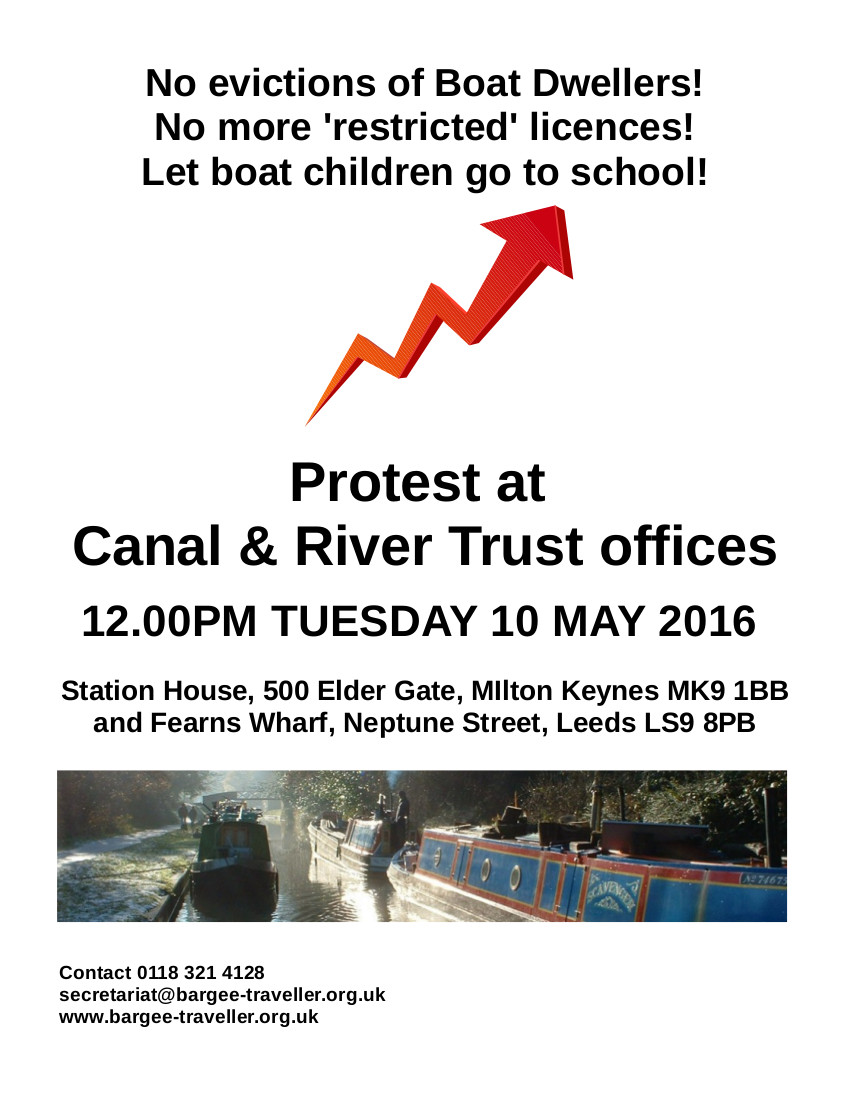 CRT is a charitable trust established in 2012 in order to carry out the functions of BW which were transferred to it under the Public Bodies Act. However, its charitable status has not stopped CRT intensifying its efforts to evict boat dwellers without permanent moorings. CRT has introduced punitive new ‘rules’ and additional licence terms and conditions that dictate the distance and the pattern that boaters without permanent moorings must travel to avoid the loss of their homes. CRT has also reduced the amount of 14-day mooring space in favour of property developments and short-term ‘visitor moorings’ for holiday boaters.

These new ‘rules’ are not supported by the British Waterways Act 1995, yet CRT is using them to issue eviction notices; seize and remove the homes of many affected. CRT has stated that it is very unlikely to consider that a boater who travels within a range of less than 20 miles is complying with these ‘rules’. In addition boaters who have not travelled in a linear fashion but have turned round, for example to access services, have been threatened with eviction.

In some cases boaters have travelled much more than 20 miles but have still been served with eviction notices based on these new ‘rules’. This puts added and unnecessary strain on boat dwellers, especially those with children, making it increasingly difficult for them to send their children to school or get to work, especially if like many workers in essential services they work shifts and/or have no access to public transport and don’t drive a car. CRT is making people homeless, disrupting children’s education and destroying communities.

In the year to November 2015 CRT spent almost half a million (£434,000) on legal fees evicting boat dwellers. At present more than 800 boat dweller households without home moorings on CRT waterways are threatened with eviction and the seizure and destruction of their homes after their boat licences were restricted to 3 or 6 months or not renewed at all. Around 100 have already been forced out of their homes, off the waterways or have been pressurised into taking a mooring, in most cases one that they cannot lawfully live on.

This entry was posted on Monday, May 2nd, 2016 at 4:44 pm and is filed under News. You can follow any responses to this entry through the RSS 2.0 feed. You can skip to the end and leave a response. Pinging is currently not allowed.