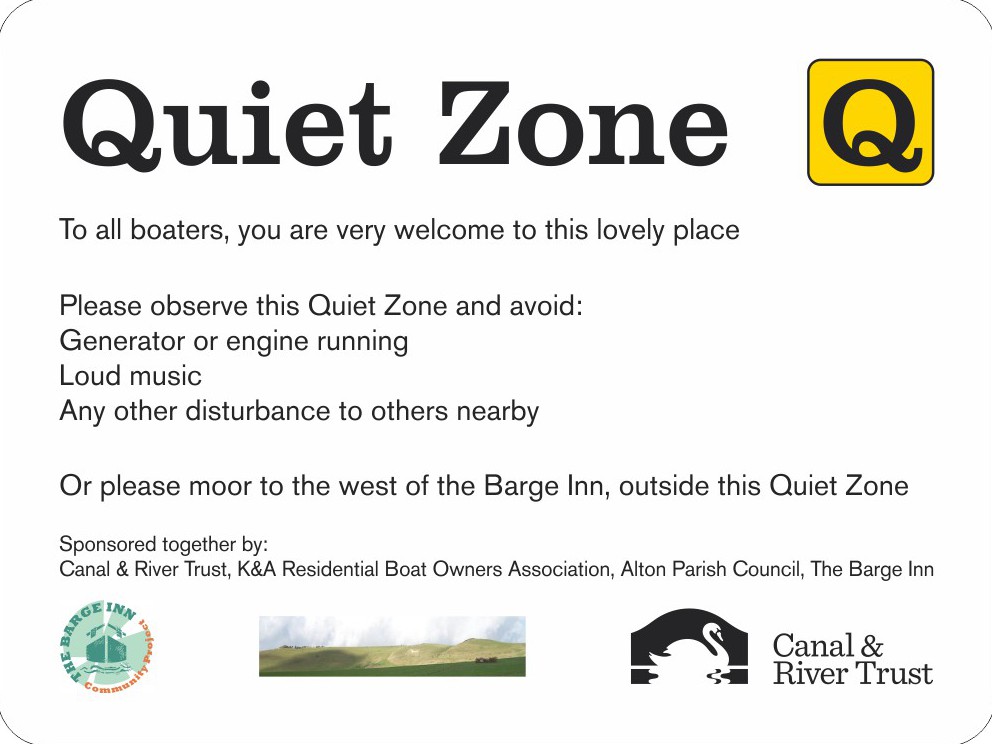 The first Quiet Mooring Zone on the canal system has been unveiled at Honey Street to a fanfare of resounding… silence. The ‘Q’ signs went up earlier this month as a result of discussions between Alton Parish Council, boaters and CRT. The Parish Council had complained about noise nuisance from boats moored in the village, and had sought to prevent all boats from mooring on the stretch of canal between the Barge Inn and Honey Street bridge. A number of boaters told the Parish Council meeting in March that this would unfairly penalise all boaters for the actions of a few, and that CRT/ BW already had enforcement powers in byelaws and licence conditions to deal with noise and other nuisance, which could have been used in this case. The Quiet Mooring Zone was proposed by Rich Burchell, the RBOA representative for the western K and A. Charles Reiss, Alton Parish Clerk said “I hope the Q sign could be repeated as a working model at other problem points, not least in the way it was agreed as a co-operative project between local residents, boaters and the CRT”. Both east and west of Honey Street there are isolated parts of the canal where noise from engines, generators or music is unlikely to disturb local residents.

This entry was posted on Saturday, October 20th, 2012 at 7:51 pm and is filed under Continuous Cruisers, Lifestyle, News. You can follow any responses to this entry through the RSS 2.0 feed. You can skip to the end and leave a response. Pinging is currently not allowed.