Chippenham MP Michelle Donelan walked the 87-mile length of the K&A canal last weekend to help raise funds for a new building for Holt Pre-School. She completed the walk yesterday having raised around £6,400. The Chippenham constituency includes the K&A Canal from Dundas to Bowerhill. Michelle Donelan is the Minister of State for Higher and Further Education. END_OF_DOCUMENT_TOKEN_TO_BE_REPLACED

As a result of the Government lock down announced yesterday 23rd March 2020, Canal & River Trust has issued the following statement: END_OF_DOCUMENT_TOKEN_TO_BE_REPLACED

Partnership tries to stop K&A being split in CRT restructuring

The K&A could be split into two waterway regions with the western end to Froxfield being run from Gloucester and the eastern end managed from London, after CRT announced on 7th December 2017 that it would restructure its management. The K&A Waterway Partnership met CRT Chief Executive Richard Parry earlier this month to try to persuade CRT that running the K&A from two different offices would be disastrous for the canal and the people who live and work on it. Mr Parry heard their case but made no promises. END_OF_DOCUMENT_TOKEN_TO_BE_REPLACED

On 14th February 2017 the Waterways Ombudsman stated in a case report (Case no 933) that CRT intended in the coming weeks to publish “illustrative cruising patterns” for liveaboard boaters with school age children. In the Navigation Advisory Group meeting of 13th February 2017, former Head of Boating Mike Grimes stated: “We’re looking at putting together and publish soon some example compliant movement patterns that boaters with children could look at to help inform their movement patterns”. END_OF_DOCUMENT_TOKEN_TO_BE_REPLACED

Our roving reporter, R Mutt has sent us this report of a disturbing incident that shows how easy it is for people to fall through the cracks in society if we don’t, as a community, pay careful attention to the needs of everyone. END_OF_DOCUMENT_TOKEN_TO_BE_REPLACED 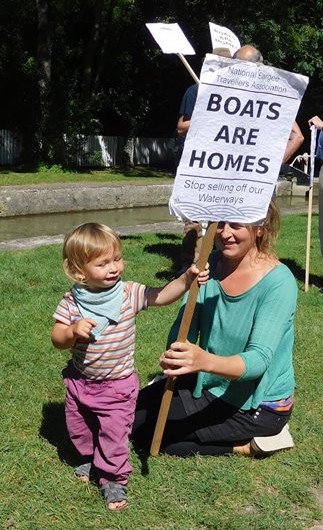 Around 30 boat dwellers without home moorings and supporters from the local community took part in a protest opposite Canal & River Trust’s (CRT) office in Devizes on 6th August 2016. END_OF_DOCUMENT_TOKEN_TO_BE_REPLACED

We are now able to publish the minutes of the meeting between liveaboard boaters, Michelle Donelan MP and CRT Chief Executive Richard Parry. The meeting was minuted by Wiltshire Council’s Peter Dunford, Community Engagement Manager for Bradford on Avon. Also included is a record of the discussions. You can download them here: END_OF_DOCUMENT_TOKEN_TO_BE_REPLACED

Liveaboard boaters and their supporters are invited to join a protest at Caen Hill, opposite CRT’s office in Devizes at 2.00pm on Saturday 6th August 2016 to express our opposition to CRT’s punitive and unlawful enforcement policy against boaters without home moorings. This policy has seen so many liveaboard boaters on the K&A having their licences restricted to 6 months, threatened with losing their homes, being pressured to give up their homes, and boat children’s education and welfare suffering due to the long distances they are being forced to travel to school. END_OF_DOCUMENT_TOKEN_TO_BE_REPLACED

A primary school head condemned CRT’s enforcement policy against boats without home moorings as “inhumane” because of its detrimental effect on boat children, in a meeting between CRT chief Richard Parry and local MP Michelle Donelan. END_OF_DOCUMENT_TOKEN_TO_BE_REPLACED