The K&A is being dredged

The K&A is actually being dredged. Well, not completely dredged, but spot dredged in some of the worst places. This long awaited work started on 17th October on the stretch between Bridge 97 at Mill Lane, Great Bedwyn and the Bruce Tunnel. This section is due to be finished by 16th December. After Christmas, dredging is planned to continue between Lock 52, Heathy Close Lock at Wootton Rivers and Bridge 133, Bishops Cannings swing bridge between 9th January and 24th June 2017. At the same time CRT will be removing vegetation from the canal banks and doing some bank protection works. 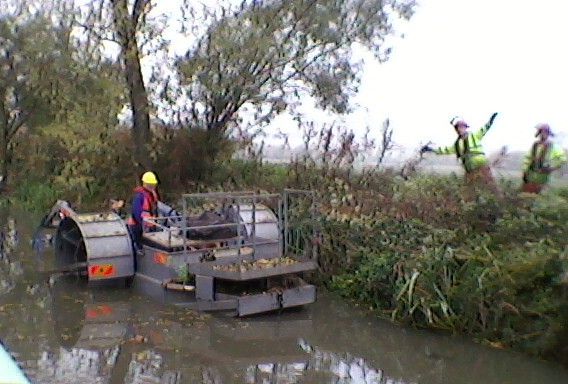 According to K&A Manager Mark Evans, the dredging will be carried out to a specification that includes a shape that will allow boats to moor in places that are currently too shallow at the waterway edge. Compared to around 12 years ago, there are considerably fewer places where boats can tie up close to the bank or at all, due to siltation and bank erosion, especially east of Devizes. The pre-dredging survey of the K&A carried out by CRT in 2014 showed that only around 40% of the canal met the specified depth of 1.1 metres.

CRT state that the navigation and towpath will remain fully open though boaters may incur short delays up to a maximum of half an hour ans should pass the dredging works with care and follow the instructions of the staff on site.

There is more information about dredging on the K&A in CRT’s response to this Freedom of Information request:

This entry was posted on Friday, November 25th, 2016 at 7:56 pm and is filed under News. You can follow any responses to this entry through the RSS 2.0 feed. You can skip to the end and leave a response. Pinging is currently not allowed.