BW’s Boating Projects report for May 2011 shows that BW is unsure whether people will pay overstaying charges. When Head of Boating Sally Ash reported on the progress of BW’s trial of “Extended stay charging” on the visitor moorings at Thrupp, she wrote: “Pertinent questions: WILL people pay? Are they more likely to pay if we offer pay-by-mobile”. This uncertainty demonstrates that the entire system of overstaying charges is nothing more than smoke and mirrors. END_OF_DOCUMENT_TOKEN_TO_BE_REPLACED

A boater sent us these photos of the work at between Whaddon and Hilperton to repair three holes in the bed of the canal. Many boats have been trapped. The stoppage is planned to end on 1st  or 2nd June. Water levels may fluctuate overnight on 29th May as BW test for watertightness between Bradford and Semington locks. In summer 2011 there was a breach between Whaddon and Hilperton Marsh. END_OF_DOCUMENT_TOKEN_TO_BE_REPLACED

The Boaters’ Voices project run by Wiltshire Council has held several meetings. The first meeting in Devizes on 27th February was attended by 45 or so people, who discussed in small groups the many positive and negative points about living on the K&A. END_OF_DOCUMENT_TOKEN_TO_BE_REPLACED

The Secondary Legislation Scrutiny Committee has recommended “that the Canal and River Trust demonstrates that it has taken into consideration the specific needs of all stakeholders, including itinerant boat dwellers, in the development of all future byelaws”. END_OF_DOCUMENT_TOKEN_TO_BE_REPLACED

K and A Boaters set up “Core Group”

A Core Group of K and A boaters held its first meeting on May 2nd in Bradford on Avon. The group’s aims are to keep informed of relevant information and developments that affect liveaboard boaters on the K and A; END_OF_DOCUMENT_TOKEN_TO_BE_REPLACED

Next week is boat fire safety week in Wiltshire

The boat fire safety advisor from Wiltshire Fire and Rescue Service will be visiting boaters along the Kennet & Avon Canal as part of boat safety week next week. Rob Buckland, who used to live on a narrowboat, will be travelling along the Wiltshire stretch of the canal between May 31 and June 5 to offer free fire safety advice and free smoke detectors to boaters. END_OF_DOCUMENT_TOKEN_TO_BE_REPLACED

BW’s internal Licensing and Enforcement management reports between June 2011 and March 2012 show that BW has set a target for “all boats not moving at least 30km during their contract period to be within enforcement process “. The reports were obtained by a Freedom of Information request. END_OF_DOCUMENT_TOKEN_TO_BE_REPLACED

Google – watching them watching us 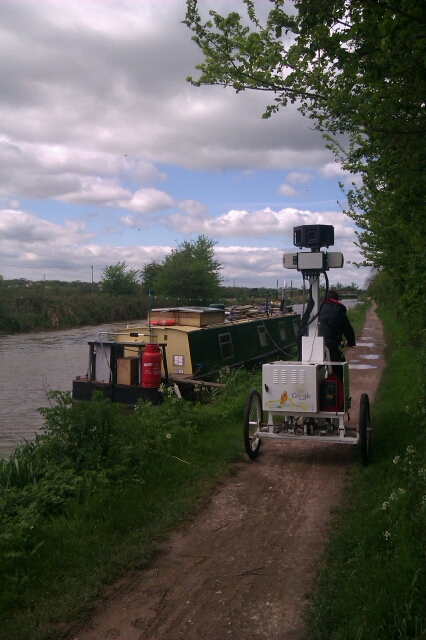 Streetview is coming to the cut… a boater sent us this photo of a Google Streetview camera and its operator filming on the towpath near Hilperton this month.

It has emerged from the minutes of a meeting on 8 December 2011 between BW and Bath and NE Somerset Council that BW intend the Local Mooring Strategy to include roving mooring permits. END_OF_DOCUMENT_TOKEN_TO_BE_REPLACED

Wiltshire Council appears to be leading the way amongst local authorities in including “Bargee Travellers” in its Gypsy and Traveller Strategy. END_OF_DOCUMENT_TOKEN_TO_BE_REPLACED

You are currently browsing the Kennet and Avon Boating Community Website archives for May 2012.