Documents provided in response to a Freedom of Information request show that in 2010-2011 BW had a target of seizing 100 “non compliant” boats per year. Monthly reports to management by the BW Enforcement Team in April, May, June, August and October 2010 also show that BW under-estimated the cost of seizing boats, which was around ￡3,700 per boat, mainly to pay lifting contractors, and as a result was likely to miss its target and only seize 75 in the year to March 2011, despite recouping some of the costs by selling seized boats.

BW has powers to seize sunk, stranded, abandoned and unlawfully moored boats under Section 8(2) of the 1983 British Waterways Act. If your boat is your home, you are entitled through Articles 6 and 8 of the Human Rights Act to defend yourself in court against action under Section 8. The reports also reveal the proposed use of Thames Valley Police to serve enforcement notices at the newly constructed Isis Lock landing in Oxford, which was revealed through another FOI response from Oxford City Council to have been constructed not for safety reasons as was declared in the consultation but purely to prevent boats mooring. The management reports also show that there were large scale errors in the classification of boat sighting data requiring “data cleansing”, and that licence evasion was predicted to rise from 3% to 5.6% over the year. You can read the full request and response here:

The target of seizing 100 boats a year roughly corresponds with a list of court actions against boaters provided by BW in November 2011 in response to another Freedom of Information request. There are 119 boaters listed as “debtors”, although the reason for the court action is not specified.

The original request also asked “which officers or post holders in British Waterways are duly authorised by the BW Board to institute court proceedings against boaters”.

The request also asked for “any policy document or other guidance to staff you have issued which sets out the criteria and checks and balances that apply before taking out Court actions against an individual boater” In response, BW supplied its “standard letters which the enforcement team hold along with process flow charts”. We publish the Liveaboard Flow Chart and Section 8 Flow Chart below. The full request and reply is here:

In contrast to the listed total of 119 court cases, the January 2012 report by Nigel Johnson, Corporate Services Director, to the BW Board stated: “Moorings enforcement: Of the 1,458 incidents opened for investigation by the Boating Enforcement Team around 334 became active enforcements of which just 6 cases involved the commencement of claims in the County Court. The rest were resolved by boats moving on, lawful moorings being found or boats leaving the network altogether. ”

This would suggest that either Mr Johnson is misrepresenting the situation to the BW Board, or that mooring enforcement is a minor issue and the bulk of the court cases against boaters are related to intentional licence evasion or inability to pay the licence fee. NABO carried out an analysis of BW’s enforcement statistics for 2010-2011 which showed that out of 2204 active enforcement cases, 60% resulted from non-payment of boat licence fees; 16% for non-payment of mooring fees; only 11% (245 boats) were continuous cruising enforcement cases, and 169 boats (7.6%) were under investigation for overstaying on visitor moorings.

Here is the Liveaboard Flow Chart, the Section 8 Flow Chart and a table showing the information BW provided about overstaying charges. 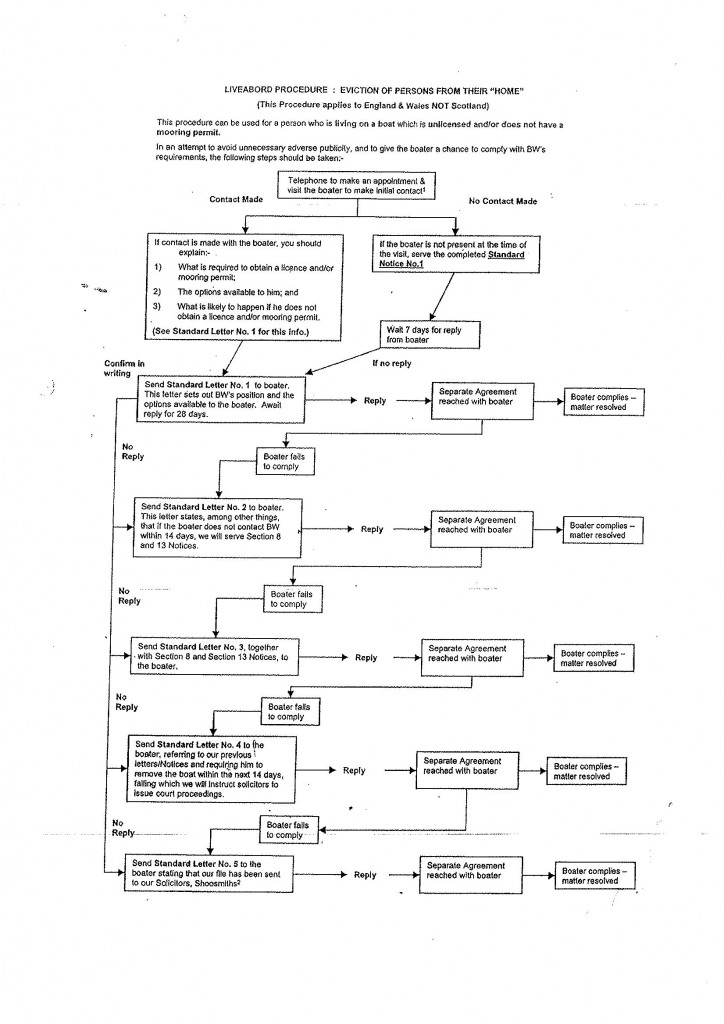 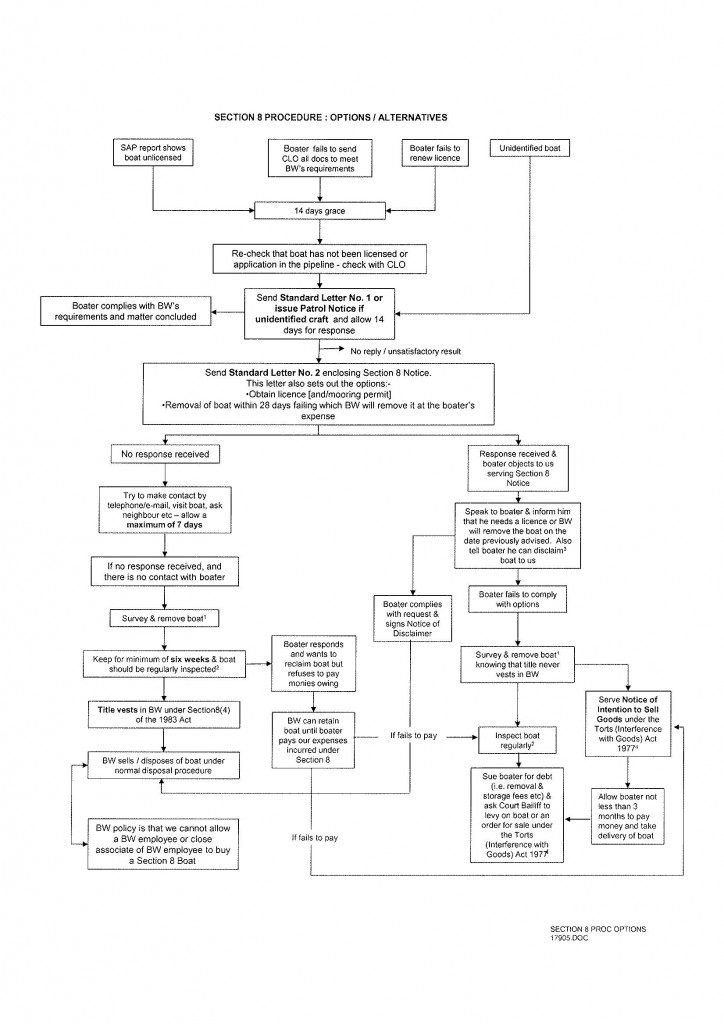 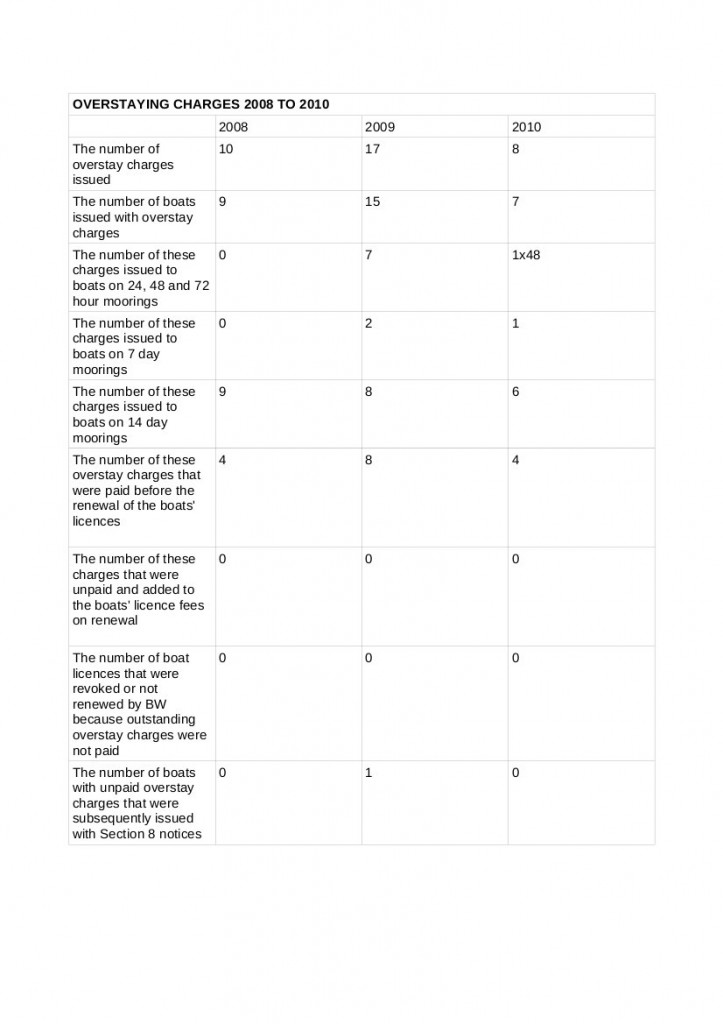 This entry was posted on Monday, May 7th, 2012 at 8:41 pm and is filed under BW Policy News and FOI Act Requests, Continuous Cruisers, Moorings Consultation, News, The Law. You can follow any responses to this entry through the RSS 2.0 feed. You can skip to the end and leave a response. Pinging is currently not allowed.