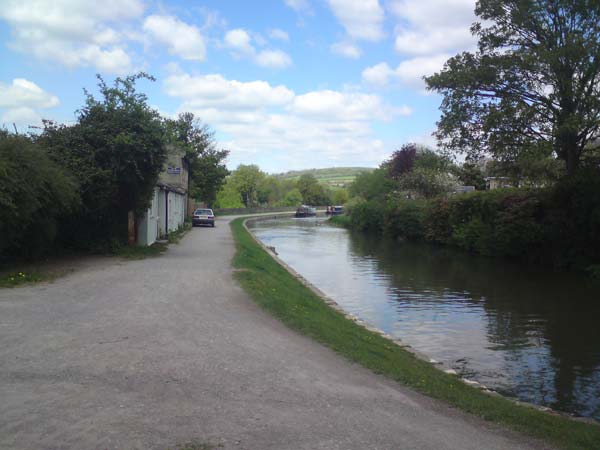 Darlington Wharf - showing the appalling levels of mooring congestion in Bath on May bank holiday weekend.

BW did not make clear at any stage of the process that responses from groups would be treated differently to responses from individuals. What was the point of delivering a letter about the consultation on local mooring strategies to every boat between Devizes and Bath when our responses were just going to be ignored? It’s a stitch-up, and what’s more, Damian Kemp, the BW staff member heading the project to implement these proposals on the K&A has inadvertently admitted in a public meeting that there is a discrepancy. Damian Kemp told the meeting at one point that the consultation results from individuals were given less weight that those from groups, yet a few minutes later he contradicted himself by saying that the results were not weighted. What is more, Mark Stephens, the Manager of the K&A, has admitted that there is no additional budget for a local mooring strategy group, and that to set it up, other areas of expenditure will have to be cut. It sounds unworkable to me!

If BW’s plans for the K&A go ahead, we will be fighting against homelessness. Many of us will be forced to choose between keeping our homes and staying in our jobs or keeping our children in school. BW has already worked with Bathampton Parish Council and other residents of Bathampton and Claverton to draw up proposed mooring restrictions which will vastly reduce the availability of 14-day moorings between Bradford and Bath, reducing the mooring space available for travelling boat dwellers who need to stay in a particular place for 14 days so that their children can go to school and they can travel to work or college or get access to health services.

These proposals are based on plans which were drawn up in meetings held in the summer of 2009 between BW and Bathampton and Claverton Parish Councils which we only found out about by accident. Boaters were not invited to these meetings or informed about them in any way.

The minutes of these meetings, maps and associated correspondence are published on this web site in the article entitled ‘The Outer Zone’, see http://kanda.boatingcommunity.org.uk/wordpress/?p=77

Here are some extracts from my notes of the discussion at the Kennet and Avon User Group Meeting in Devizes on 29 April 2010.

Agenda headings and particularly interesting bits of the discussion are highlighted in bold type.

Mark Stephens, K&A Canal Manager (MS): The Kennet and Avon Canal Trust is quite advanced as a voluntary organisation. BW is trying to pilot charitable ideas on the K&A. The K&A is at the leading edge of transformation. Even if it didn’t fit the third sector model, we want to engage everyone who works and/or lives on the canal to the K&A’s benefit. The K&A has been identified as an area where we try stuff out. We are looking to plug people into that.

DK: The reports of both consultations will be published Tuesday 4 May. The national consultation had been analysed by a volunteer team and the local one in-house by BW. A volunteer who is a data analyst gave a presentation of the final draft of the national report on 29 April to BW. In the near future BW will meet major boating organisations with the volunteer assessors to draw up recommendations for BW’s directors. BW will go ahead with local mooring strategies because the consultation endorsed it. The first pilot will be between Devizes and Bath. It has also been agreed that the major boating organisations will sit on the nominations panel (Editor’s note: this includes APCO and BWAF*) which will be set up very soon. Nominations for the steering group will be asked for soon; BW is still talking to boating organisations about how to do this. The first steering group meeting will be in June; BW is looking to implement a local mooring strategy by the end of the year. Anyone who uses the waterway can nominate themselves to be on the group, it will be an open court, and the major boating organisations and BW will decide who is on the steering group.

DK: Yes, where boats can stop and how long.

Question: Will groups be allowed to decide their own ideas?

DK: they have to fit with the waterway unit’s technical capacity.

DK: That’s because some of the responses were from groups which represented larger numbers of people therefore more people were in favour.

Question: This was not made clear at the beginning of the consultation. It has not been assessed fairly.

(Editor’s note: A rather heated discussion followed which I wasn’t able to minute. This included someone saying that out of 35,000 BW licence holders only 160 responded to the national consultation, which DK agreed was useless.)

MS: An explanation is required of how the consultation was assessed regarding group votes and individual votes.

DK: I’m happy to reconvene to discuss this. One response counts as one response in the published results – it is not weighted. (Editor’s note: contradicting what he said before).

Question: Can we have another meeting to discuss this issue at length?

Question from a Boat Club: We’d like to be invited.

DK: Yes you can have a meeting with us as before (referring to the meeting between Wiltshire Council, BW and boaters).

Question: Wiltshire council are keen to do the same.

Ken Oliver (Wiltshire Council Canal Officer) :There will be a meeting on 27 May of the Wiltshire Federation of Community Area Partnerships on this issue; I have taken this issue to all the Area Board meetings along the canal.

Keith Rossiter (Bathampton Parish Councillor): The terms of reference should include BW performance – how the rules are and how BW enforce them, not just how long and where boats can moor. We saw that as what a local steering group was for.

DK: Other issues need to be addressed, it is a factor in other matters eg. facilities.

Keith Rossiter: All organisations need to be represented, we need to get the consultation process right, include all canal users.

DK: A steering group will hopefully be able to resolve the issue of the need for more 14-day moorings.

Question: How many boats on the K&A?

DK: Maintenance is an issue, the lack of dredging means a lack of available moorings. It may be there’s a split in the steering group work between areas.

DK: All comments will be taken on board despite what you think. I’m open to suggestion once we know who’s on a group to split it.

Question: We need a generic solution, not a different solution to a different area. There’s no point in coming up with a new strategy unless you commit resources.

DK: What will work in one area won’t necessarily work in another area.

Question: Several years ago BW said the K&A had reached saturation point – now there are lots more boats. There’ll be a new marina at Foxhangers, it’s not residential so most boats will be new boats which will increase the problem.

DK: I’m not going to answer that at present.

Question: What is the budget for the steering group? Is there any new money? Will it be self financing?

MS: We are stretched, something else will get taken off the budget.

Question: We need an open meeting to deal with the mooring issue so as not to eat into these meetings. So far the only forum has been the consultation responses.

Question: this is meant to be a user group meeting.

MS: There are individuals here not represented by groups. There will be a meeting as already mentioned.

Question: How are you going to inform boaters not in groups? I only knew about this meeting because a friend told me.

DK: We will make sure the meeting will be posted on our notice boards.

MS: There are too many things trying to happen at this meeting; maintenance and mooring and business – they don’t need to go together. What about a mooring oriented user group meeting? It needs forming properly, needs some work.

Keith Rossiter: We’ve just gone through a consultation, people have taken the trouble to respond, so Mark, don’t come with a woolly idea, tell people what you want to do, a firm proposal.

MS: DK hasn’t come to give the results of the consultation, just an update. If there is such a meeting, there will be a firm proposal.

Question: Why has BW not enforced the 14 day rule over the last few months?

Russell Bennett, Enforcement Supervisor: We are concentrating on licence evasion which is why no patrol notices have been issued.

Later on Russell said: “There’s no income in people overstaying on a 14-day mooring”.

Question: Will BW stop trying to enforce the Mooring Guidance for Continuous Cruisers which is not part of the law, and stop threatening to terminate the licences of boaters who do obey the 14-day rule, and start enforcing the 14-day rule instead?

Russell: I can’t confirm that we won’t pursue boats that are not on a progressive journey.

Among other things, Russell reported that two new enforcement officers had started work on the K&A, so patrols and enforcement will be much more frequent from now on, and patrol notices will be issued to overstaying boats.

This entry was posted on Monday, May 3rd, 2010 at 10:31 pm and is filed under Moorings Consultation. You can follow any responses to this entry through the RSS 2.0 feed. You can leave a response, or trackback from your own site.