CRT has stated that boaters without a home mooring on a restricted 6-month licence are not expected to cover the same range as those on a 12-month licence. Matthew Aymes, CRT Customer Support Manager, Licence Support (ie enforcement manager) said in an email on 23rd February 2021:

“I’ll be as clear as I can be in saying that we absolutely do not expect those on a 6-month licence to achieve the same cruising range as those on a 12-month licence (although they’re obviously welcome to!).”

This is in contrast to a number of enforcement decisions where boaters who travelled a range of less than 20 miles in a 6-month restricted licence have had their licence renewal again restricted to 6 months or refused altogether unless they take a mooring.

The email from Mr Aymes, which followed a meeting with CRT Council member Dave Mendes da Costa, who is an activist with the National Bargee Travellers Association (NBTA), continued:

“As you rightly point out, each case is different: it’s not as easy as saying minimum range for 12 months = 32km, so 6 months = 16km. 32km shouldn’t be considered a target for 12 months to guarantee meeting the licence requirements. Behaviour within the cruised range is also considered; turns, overstays. The same is true for the principle of cruising a range of 16km in a 6-month, restricted licence.

It’s fair to say that, purely considering cruising range, we’d expect a boater to cover a minimum of half the distance in 6 months that they would in a 12-month period that meets our guidance. It should be remembered that during a restricted period, we ask to see an improvement in the cruising pattern. That may mean an increased range, less shuttling, fewer overstays or a combination of all three, as well as not just repeating the previous 6-month’s cruise.

The offering of a 6 month licence isn’t intended as “last chance saloon”. It’s an opportunity to highlight that the previous cruising hasn’t been in line with our guidance. This could be indicative of a number of things, including a lack of understanding of the requirements of a licence without a home mooring, health issues or other difficulties. It’s a chance for us and boaters to identify issues and explore a boater’s circumstances to see if there are things we can do to help.

We do have a responsibility to manage the waterways by ensuring people are meeting their licence requirements. In cases where there aren’t exceptional circumstances, we need to be clear with boaters what those requirements are to continue being licensed without a home mooring. If people don’t meet these requirements without good reason then, yes, a restriction can be the first step toward being required to obtain a home mooring. I’d always ask that boaters discuss any challenging circumstances with their LSO [Licence Support Officer, ie enforcement officer] and, where it’s reasonable, we’ll advise and support as much as we can.

As we discussed on the call, I recommend that boaters maintain a cruising log. Our sightings are thorough (even through covid, although admittedly slightly reduced) but because of our schedules and some boats’ movement there are occasions where we may miss a boat on a round of sightings. If needed, cruising logs can help demonstrate a boater’s cruising pattern in the event of a missing sighting. Cruising logs are best when supported by things like receipts from marinas, shops, chandleries etc. or photos of the boat at identifiable locations. If these are time-stamped or geo-tagged, then great, but we appreciate not everyone has access to digital cameras or smart phones.

We don’t view a restricted licence as a punishment – it is offered at a pro rata cost – and is an opportunity to focus on what is needed to get the boater cruising in line with our guidance. At the point of first restriction, we don’t generally have an appeal process where there is uncorroborated disagreement with our sightings. This is because, provided that the necessary improvements are made, the boater will be able to relicense for 12 months as normal at the end of the restriction. If, at the end of the restriction, no further licence is offered without a home mooring, the boater is then able to appeal and the decision will be reviewed. It’s at this point that we’d ask for any evidence of mitigating circumstances or evidence of subsequent missed sightings.

If the boater cruises in line with our guidance during the restricted licence period, they should have no problems relicensing for 12 months. At the point of first restriction, if the boater can show our sightings have missed them, I’d ask they inform their LSO, who can log the concern on the record, and any evidence of missed sightings be kept safe in the event it’s needed after the restriction period. If the evidence shows missed sightings that, had they been recorded, would have prevented restriction, then we will reconsider the decision to restrict and may offer a full 12 month licence. At the point of first restriction, LSOs will try to contact boaters so this would be a great time to discuss these concerns, so please, if you see the call come in, don’t ignore it!”

We suggest that boaters do not discuss enforcement matters on the phone with CRT, but correspond in writing so that they have evidence of what was said by both sides. We would also point out that the requirement for a 20-mile/ 32 kilometre range, or any other range, is not a requirement set out in Section 17(3)(c)(ii) of the British Waterways Act 1995, which does not include any distance required for compliance, nor does it specify any travel pattern beyond the limit of 14 continuous days in any one place. In requiring a specific range of movement within a boat licence period without a home mooring, CRT is acting beyond its powers.

In 2019 the Holder family, who live on Olive, were forced to leave the K&A and take refuge on a mooring in Bristol Harbour following two successive 6-month licence restrictions. The family had travelled a range of 12 miles in their first 6-month restricted licence and 17.5 miles in the second 6-month licence. After the first licence restriction they made repeated requests to CRT enforcement staff for advice on how far they should travel in 6 months, which did not receive any helpful answers. Nobody from CRT informed them that CRT would expect them to travel a range of 20 miles or more during each 6 month licence period. The family were served with Section 8 and Section 13 notices in 2019 giving notice of the removal of their home.

“If CRT had been transparent from the start about its expectations of boaters whose licence renewals were restricted, our family would have been able to know for sure what we had to do to avoid losing our home, rather than the year of uncertainty, stress and anxiety that we endured”. 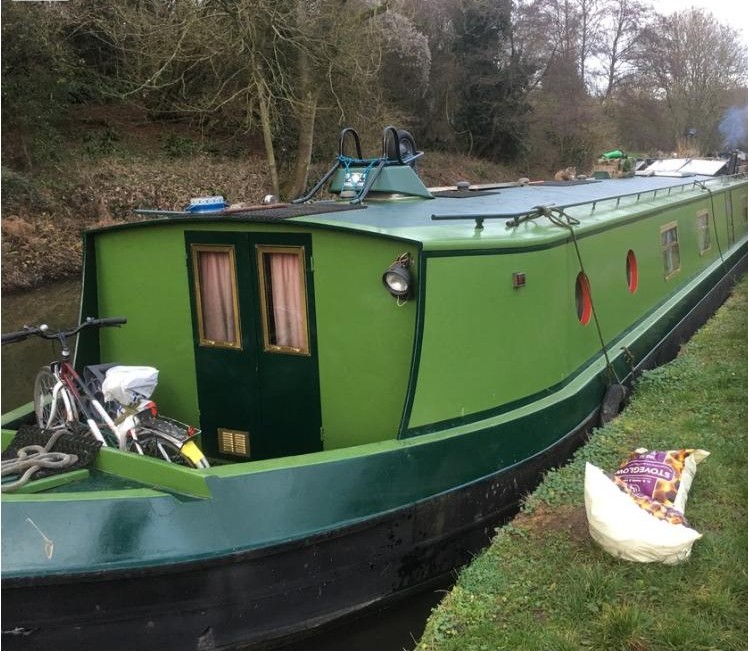 This entry was posted on Sunday, March 14th, 2021 at 6:21 pm and is filed under CRT Policy News. You can follow any responses to this entry through the RSS 2.0 feed. You can skip to the end and leave a response. Pinging is currently not allowed.