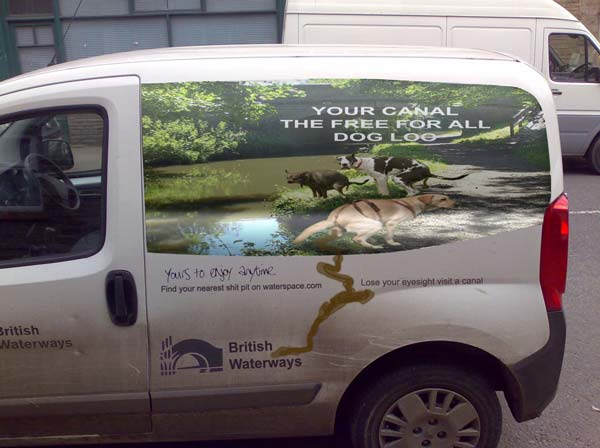 BW saw this spoof advertisement on 19 April and Simon Salem of BW responded the following day. He advised that BW cannot sort out this problem because they do not have the necessary legal power. Instead they have a voluntary code. I have asked why BW cannot use the space on the side of their vans to pass on an important public message. I have proposed:

ATTENTION DOG OWNERS You are not welcome on the towpath unless you pick up your Dog mess. Keep off, keep away from the canal unless you do.

I would also like to see BW create a new logo that encapsulates this message and invite all those who advertise canal products and services to use it. I have also asked, in the light of shortage of funds, how much their new van advertising has cost. Being in the industry, I suspect it is many tens of thousands of pounds. No answer was provided. I believe it embarrasses BW to tell and will appal us when we are eventually told.

On a similar matter I understand it has cost BW in excess of £90k to secure a new definition of ‘bona fide’ navigating. Clearly when it comes to spending our money BW has its priorities in the doodoo.

Originator of the subvertisement (and others to come) incensed at BW’s profligate spending of our money whilst pleading poverty.

Tags: complaints, Letters to BW and others

This entry was posted on Sunday, April 24th, 2011 at 2:01 pm and is filed under Letters to BW and others, Opinion. You can follow any responses to this entry through the RSS 2.0 feed. You can leave a response, or trackback from your own site.

One Response to “Dog Loo”