Looking Glass Eyes and the Laws of Physics

Life along the Kennet and Avon canal has of late adopted a gently surreal Kafkaesque tone.

The latest offering from the CART is a letter telling people they haven’t ‘moved through enough neighbourhoods’ in the last three months. it ends with a black edged obituary box stating “YOU ARE AT RISK OF LOSING YOUR BOAT’. 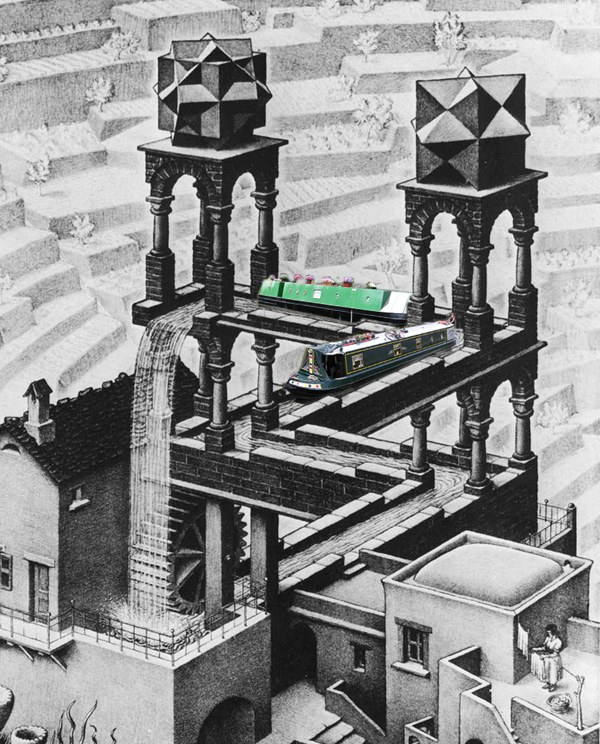 A neighbourhood in the CART dictionary being a recently chosen substitute for the word they are not allowed to use ‘place’. The word that dare not speak its name since CART were told by a judge not to abuse it because it actually means something as part of a law and cannot be simply mangled in bureaucratic fashion to mean something completely different – a favourite tactic of the CART dictionary writers.

So, not enough movement….how do they know? Well apparently every two weeks your boat will be ‘logged’ and if it’s still in the same place two weeks later…. well it hasn’t moved – couldn’t have done. Hmmm. Strange enough, but….if it wasn’t spotted anywhere two weeks later but two weeks after that it is spotted in the same place it hasn’t moved for four weeks. Conveniently ignoring the laws of physics – of which more later. Spotted at Dundas in July, again in September, well you must have been there two months.

Now take this a little further and it turns that the legal officer of NABO who received one of these letters and was told it was because ‘he moved too much’ too fast for the boat checkers apparently, on his summer wanderings around the Kennet and Avon – in exactly the same way he has for twenty years or so.

Another odd little quirk; you will be logged in a place whether you are moored there, taking on water, waiting for a lock or simply cruising past. And no mention will be made of which way you are facing.

All in all the probability of CARTs boat sightings being accurate is as near zero as makes no difference.

Kafka, Lewis Carroll, who knows who dreamt this surrealism. Could be laughable, no? Well except for one thing….. these are people’s homes and lives. Getting one of these letters after a hard day is no joke. It’s intimidating and harassing and it makes people feel bad. It does CART no good at all, just a few more people who thing they are on some kind of IngSoc hit list.

And what would be the end result if CART gets their way and all these boats shuffle neatly from one neighbourhood to another on the day before boat checking day, never going anywhere east of Newbury or west of Bath?

Absolutely nothing. Nada. Niente. Rien. It’s the laws of physics you see….. every boat has to be somewhere. So whether they’re running around neighbourhoods or just getting on with their lives like they have for years their boat will be moored somewhere.

This entry was posted on Wednesday, September 24th, 2014 at 9:25 pm and is filed under News, Opinion. You can follow any responses to this entry through the RSS 2.0 feed. You can skip to the end and leave a response. Pinging is currently not allowed.