﻿The local mooring strategy process appears to be grinding to a halt. The ninth meeting of the steering group, which was to be held in Devizes on June 17th, was postponed because BW decided it would be better to hold it after June 23rd when national user groups were due to meet with BW to “discuss” changes to the Mooring Guidance for Continuous Cruisers following the BW v Davies judgement. If nothing else, this proves that the mooring strategy is designed specifically to target boats without moorings. BW had demanded that the steering group should decide “how far a continuous cruiser must move to comply with the guidance”, regardless of whether the guidance was lawful or not. BW did not want the steering group making a local decision that conflicted with its national guidelines – even though the local mooring strategy was specifically tasked with developing a local strategy to suit local conditions. Contradictory? This is by no means the first example we have come across of BW wanting to have things both ways.

The meeting rescheduled to July 12th was also postponed due to the illness of the BW Chair Damian Kemp. Steering group members received an email from Sally Ash saying “Damian and I have discussed the pros and cons of my taking back chairmanship of the MSSG in his absence but have concluded that to lose the continuity could be counter-productive. In any case, I’m booked elsewhere on 12 July. We’ll keep things under review however.”

In typical cavalier fashion, Ms Ash also disclosed to the group information about Mr Kemp that most employers would regard as confidential. We wish Damian a speedy recovery and hope that the ineptitude of his line management is not contributing to unhealthy stress levels. No date for the next meeting has been fixed.

Meanwhile, a boater who is a Harry Potter fan has sent us the communication below, drawing our attention to an uncanny likeness between Sally Ash and Dolores Umbridge… 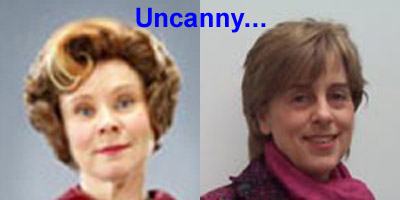 This entry was posted on Thursday, July 21st, 2011 at 3:28 pm and is filed under BW Policy News and FOI Act Requests, Continuous Cruisers, Mooring Strategy Committee. You can follow any responses to this entry through the RSS 2.0 feed. You can leave a response, or trackback from your own site.