The K&A Boaters’ Action Group’s next meeting is on Monday 9th April 2018 at 7.30pm at the George Inn, Bathampton BA2 6TR, right on the canal at bridge 183. All are welcome. END_OF_DOCUMENT_TOKEN_TO_BE_REPLACED

CRT announced on 6th March 2018 that it would not increase licence fees for boats without a home mooring. However there will be fee increases for widebeams and significant reductions in the prompt payment discount, which together will result in more liveaboard boaters struggling to pay the licence fee, more boats becoming unlicensed and more people losing their homes.

CRT’s report on the year-long consultation also stated that “a further review will be undertaken to establish how the significant growth in demand from boats without a home mooring in key locations can be addressed, to fairly reflect the benefit experienced by those boaters without a home mooring in London and other highly popular locations”. CRT stated that these ‘highly popular’ locations include Bath. END_OF_DOCUMENT_TOKEN_TO_BE_REPLACED

The removal of the bins at Darlington Wharf in Bath a month ago has inconvenienced boaters to such an extent that Julian House Travelling Community Support service met with Bath Waterspace Project Co-ordinator Cleo Newcombe-Jones today (15th February 2018) to discuss rubbish bins and overall facilities provision on the K&A within the BaNES Council area. END_OF_DOCUMENT_TOKEN_TO_BE_REPLACED 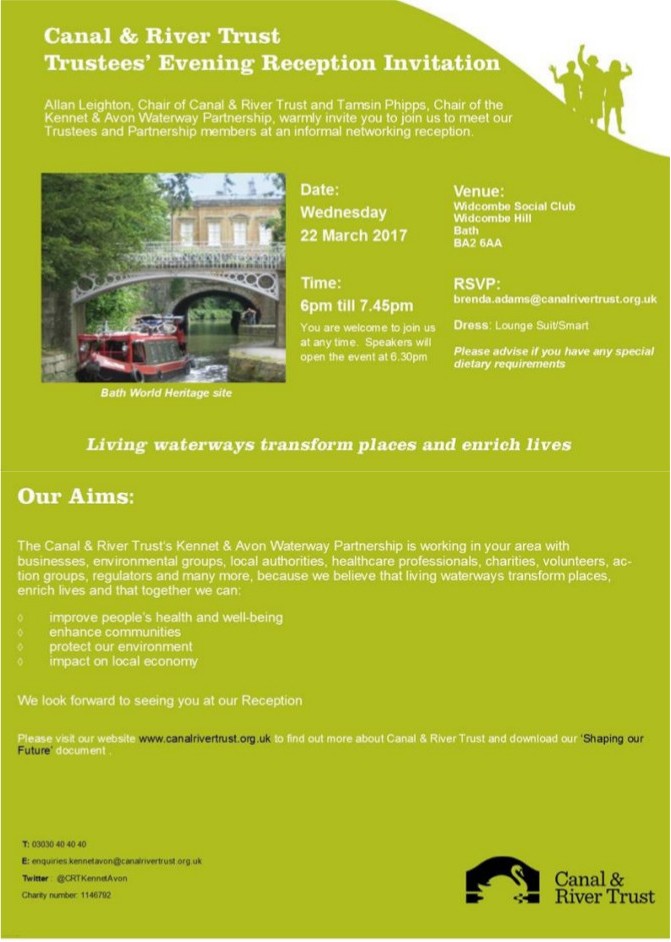 The next meeting of the K&A boaters’ action group will be on Monday February 13th 2017 at 7.30pm at The Barley Mow, 32 Bathwick St, Bath BA2 6NZ. END_OF_DOCUMENT_TOKEN_TO_BE_REPLACED

CRT’s Short Term Moorings Framework for Change published in March 2015 states that CRT will always consult users before making changes to visitor moorings, and also that any changes should be based on evidence of a need for the change that is being proposed. On the K&A, CRT has made changes to visitor moorings without any consultation at all and seemingly without any evidence that the changes are needed. END_OF_DOCUMENT_TOKEN_TO_BE_REPLACED

Our roving reporter, R Mutt has sent us this report of a disturbing incident that shows how easy it is for people to fall through the cracks in society if we don’t, as a community, pay careful attention to the needs of everyone. END_OF_DOCUMENT_TOKEN_TO_BE_REPLACED

Documents obtained by a Freedom of Information request to BaNES Council, and the response to a recent complaint about proposals to restrict mooring at Mead Lane, Saltford, show that BaNES and CRT are planning a mooring strategy for the River Avon and the K&A Canal between Hanham and Limpley Stoke. END_OF_DOCUMENT_TOKEN_TO_BE_REPLACED

There will be a family-friendly festive get together for boaters on Saturday 12th December, 3pm-9pm, at the Love Lounge, The Bell Inn, Walcot Street, Bath BA1 5BW. The event will include children’s activities, music, information and discussion about what to do if CRT has refused to renew your boat licence for 12 months. There will be time to socialise and sing a few sea shanties too.  END_OF_DOCUMENT_TOKEN_TO_BE_REPLACED