On Saturday 25th May at 12 noon the Paddington Party and Flotilla will begin on the canal near Paddington station.  END_OF_DOCUMENT_TOKEN_TO_BE_REPLACED

A group of fourteen boaters from the K&A joined the national Boats Are Homes march on Saturday 8th April 2017. The demonstration was organised in protest against CRT’s unlawful enforcement policy against boaters without home moorings. Boat dwellers from all over the waterways took part. The march was organised by the National Bargee Travellers Association. END_OF_DOCUMENT_TOKEN_TO_BE_REPLACED 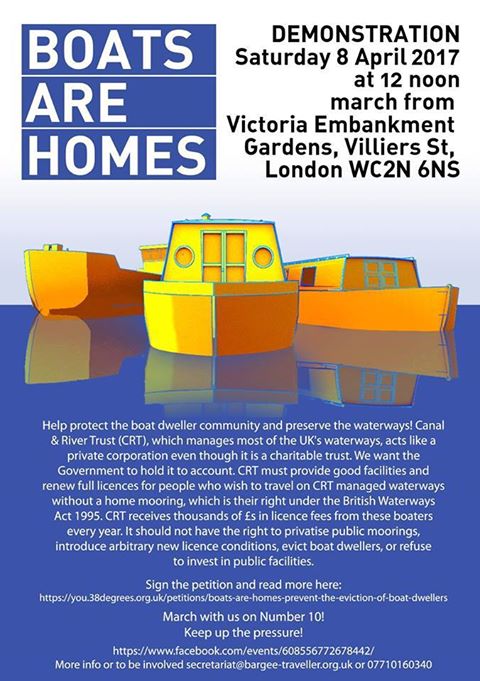 END_OF_DOCUMENT_TOKEN_TO_BE_REPLACED

Liveaboard boaters from the K&A joined demonstrations outside CRT’s headquarters in Milton Keynes on 10th May where in total about 90  boat dwellers without home moorings protested against the charity’s punitive and unlawful enforcement action against boats without a home mooring. Some 15 boaters also protested at CRT’s licensing office in Leeds. END_OF_DOCUMENT_TOKEN_TO_BE_REPLACED

Following the handing in of the Boats are Homes petition to Prime Minister David Cameron and the Boats are Homes march, boaters are invited to join a protest at Canal & River Trust offices in Leeds and its Milton Keynes HQ at 12.00 noon on Tuesday 10th May 2016. END_OF_DOCUMENT_TOKEN_TO_BE_REPLACED

On 16th April 2016, over 200 boat dwellers including a group from the K&A marched to Downing Street to hand in a petition against CRT’s policy that threatens boaters without a home mooring with restricted licences and ultimately eviction from CRT waterways. END_OF_DOCUMENT_TOKEN_TO_BE_REPLACED

A group called the People’s Flotilla Against Austerity is holding a demonstration in Milton Keynes on 7th June to protest against cuts in Government spending and against worsening conditions for all canal users on CRT waterways. END_OF_DOCUMENT_TOKEN_TO_BE_REPLACED