Maybe it’s time for us to start a Mead Lane channel, no sooner has a major victory been won as BANES are advised by the Judge that they would likely lose a judicial review than the residents take the law into their own hands again.

So, first the good news, that I will quote wholesale from Blanche Cameron’s post on the London Boaters – We are These People Facebook Group;

Total respect to the amazing, funny, inspiring Becki Snarl in Saltford, Bath on the River Avon who just won a judicial review she brought herself alone, but benefiting hundreds of other boaters, families, disabled and below poverty line.

Becki said “This has taken a lot of time and energy but I made a legal challenge to Bath Council, who had tried to remove some important moorings on the River Avon, due to the unfounded complaints of a minority of bigoted residents with nothing better to do, and I won!

The judge ordered the council to rethink their decision as they had not listened to the results of the expensive consultation and engineer’s survey that they commissioned, or consulted with a single boater, or we would go to court. Either they saw sense, or more likely were advised that they did not have a legal leg to stand on. And we can now moor there all year round.

Although this is not over, as the residents will stop at nothing, and the issue has become political within Bath council, this is a real victory for the little people. Whilst the boaters are more busy meeting their hierarchy of needs than the retirees in the million pound houses, it shows that we still have the intelligence and where with all to stand up to injustice and the erosion of our rights to this perfectly legitimate and legal life style. Don’t fuck with us!

And Becki wrote today, “Community Law Partnership with Chris Johnson were instrumental. They specialise in helping travellers. Plus I was lucky enough to get QC Jamie Burton who’s done loads for human rights including working on the Grenfell inquiry.”

Looks like the Community Law Partnership might also be looking for boaters who will be affected by the Police, Crime and Sentencing Bill due to come in in the autumn.

And, as Becki says “the residents will stop at nothing” so here’s the bad news 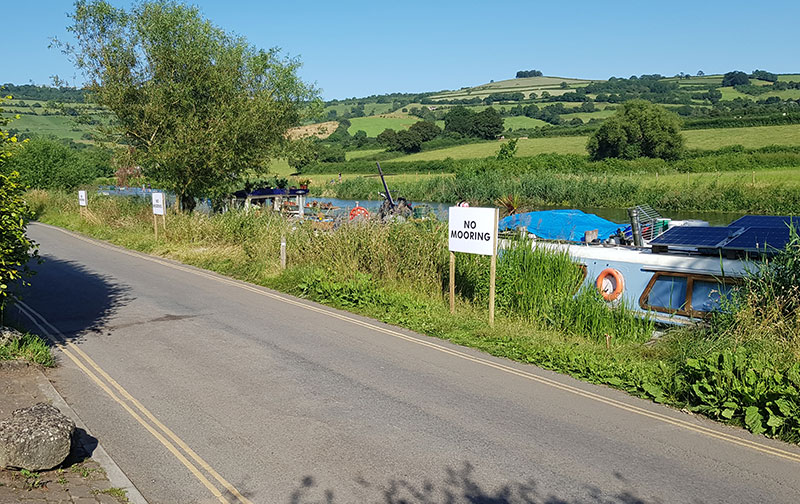 As reported by a boater moored at Mead Lane on Saturday, “As today new signs “No Mooring” were installed. All of us moored here are quite confused by this action. Don’t know how to approach this. Could you please shine some light on this.”

At the very least this is harassment and possibly contempt of court (although as BANES withdrew their claim, it’s probably not). But, if it hasn’t already been done, can someone go and remove them please. Looks like a bit of treated batten might be useful for something. Maybe the signs could be repurposed, suggestion: “NO HARASSMENT”, and attached to the resident’s garden gates

This entry was posted on Monday, July 19th, 2021 at 11:00 am and is filed under Mead Lane, Mooring, News. You can follow any responses to this entry through the RSS 2.0 feed. You can skip to the end and leave a response. Pinging is currently not allowed.

3 Responses to “The Mead Lane Channel”