Towpath washed away at Caen Hill

The Caen Hill flight is closed until further notice today (26th October) after part of the towpath was washed away at the Black Horse. It appears paddles at lock 50 were left open overnight and the pounds between locks 50 and 47 were flooded. Many of the gardens of houses adjacent to the canal at the top of Caen Hill have also been flooded. The towpath between Devizes wharf and the Black Horse has been closed. 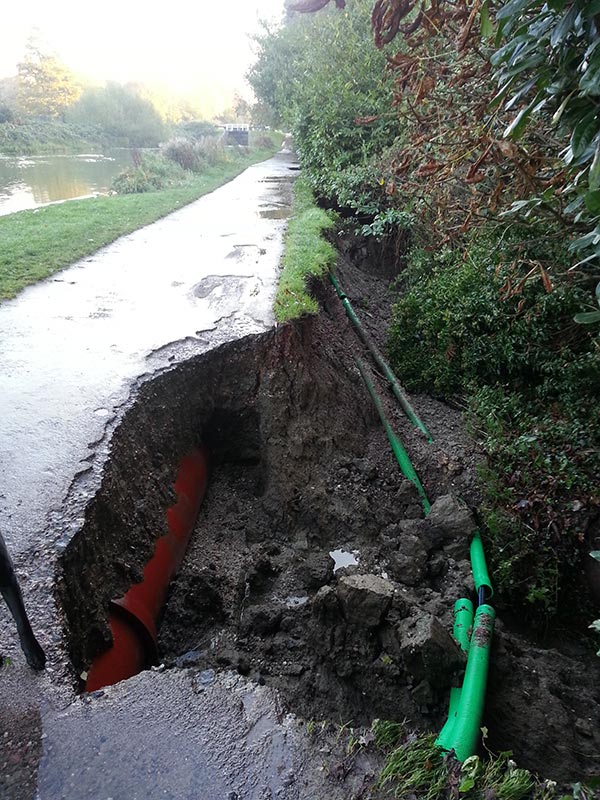 The towpath in Wharf pound at the top of Caen Hill flight.

In the last 24 hours there have been several water level issues on the K&A. Water has been overtopping the locks at Froxfield and Crofton, while the level in the Long Pound has dropped by about 6 inches overnight. CRT has not ruled out deliberate vandalism. Many boaters are heading towards the Long Pound to avoid getting trapped by the planned stoppage at Seend to repair the road bridge at Seend wharf; the canal will be closed for over 4 months from 2nd November to 11th March. We will bring you more information as soon as we have it.

When the Bill that became the British Waterways Act 1995 was drafted, there was considerable discussion of the need for boats without a home mooring to have the right to stay longer than 14 days in one place if it was reasonable in the circumstances. Navigation stoppages were one of the chief reasons why it was considered necessary to prevent boaters facing enforcement and the loss of their homes as the result of circumstances beyond their control.

This entry was posted on Monday, October 26th, 2015 at 12:48 pm and is filed under News. You can follow any responses to this entry through the RSS 2.0 feed. You can skip to the end and leave a response. Pinging is currently not allowed.