As a holiday treat, we bring you Trade’s End by traditional folk band Whistling Treason from Bradford on Avon. You can listen to it here:

Here are the lyrics: 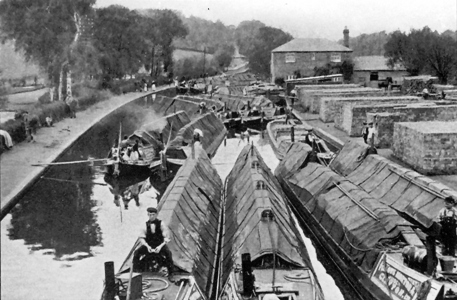 Chorus:
Damn em to hell,
Sound out their death knell,
For we all can see trouble descending.
Hang em up high,
Let the crows peck their eyes,
Damn em to hell, the trades ending.

The bottom’s too close to the top,
We all say.
Damn…
The pound’s full of silt,
So we scrape it away.
Damn…

We ne’er got paid proper,
For our work in the War,
Damn…
Just rations and wages,
Far less than before.
Damn…

They’d shut us all down now,
If they had a chance.
They’d turf the cut over,
With no second glance.

For the trade will soon pass,
And the boats will be gone.
And now in their place,
Roaring lorries have come.

Now the nossers, and jossers,
And noddy boats cruise.
They rev and they ram,
With their cargo of booze.

This entry was posted on Monday, March 28th, 2016 at 12:50 pm and is filed under News, Stories. You can follow any responses to this entry through the RSS 2.0 feed. You can skip to the end and leave a response. Pinging is currently not allowed.