A volunteer mooring ranger told a boater without a home mooring recently that “You are one of those continuous cruisers that won’t follow the rules”, demonstrating a prejudiced attitude that is contrary to the job description for these volunteers. The job description includes “Improving the visitor experience at our popular visitor mooring sites … you could be the friendly face of our waterway” and “..increasing the satisfaction of the boating community at large”.

The volunteer had no evidence of the boater’s movements or access to CRT’s boat sighting records to back up his accusation. The liveaboard boater had in fact been moored in 15 places between Bath and Devizes in 36 days, clearly exceeding the boat movement advised by the K&A Interim 12-month Mooring Plan. This advises mooring in 12 places (re-named “neighbourhoods”) in one year.

Boaters have warned CRT and BW many times that using volunteers to take boat sightings would attract the wrong type of person either because they were likely to have an anti-liveaboard agenda or a desire to spy on people. The boater’s response to this incident, which took place last month, was to state that he complied with the law and that any additional “rules” were unlawful. This did not stop the volunteer, who resorted to sarcasm, enquiring where the boater had studied law.

Also last month, a boater in the Midlands observed two people photographing his boat. They were not wearing CRT staff or volunteer uniforms. He believed they were self-appointed vigilantes, unofficially reporting boats to CRT, a task which the IWA West Midlands branch has encouraged its members to carry out. If you have concerns about someone who appears to be taking sightings or photographs of boats, make sure you ask to see their identification. 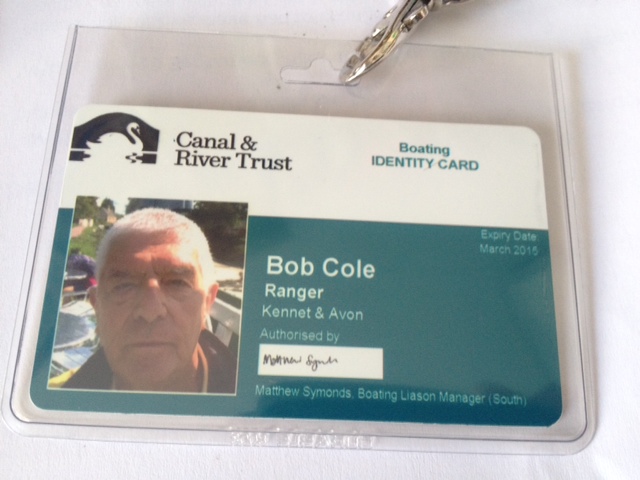 All CRT enforcement staff and volunteers have to carry identification and wear a uniform. The volunteers’ ID card is pictured above. The volunteers’ uniform is a blue sweater, blue polo shirt and yellow hi-viz vest; these should all be marked “volunteer”. According to CRT, they usually only wear the sweater or polo shirt. CRT says that it does not issue coats to volunteers, therefore if the weather is bad they may wear their own coat and the hi-viz vest on top. The enforcement staff uniform is a white polo shirt, black jumper, black fleece, black trousers and a black coat, with the CRT logo on the shirt, jumper, fleece and coat.

Unfortunately it is not just volunteer roles that attract the wrong type of person. Liveaboard boaters, especially those with disabilities or health problems, regularly report being bullied and harassed by enforcement staff. And former K&A enforcement supervisor Russell Bennett was known to have spied on a young female boat dweller. Mr Bennett resigned from his post in 2013 following a complaint of sexual harassment by a female member of staff.

Anyone who is not a CRT employee or volunteer who watches your boat, photographs it or takes its number  could be committing an offence under the Protection from Harassment Act 1997. This offence is often referred to as “stalking”. You can report suspicious activity to the Police on 101.

This entry was posted on Wednesday, September 24th, 2014 at 3:25 pm and is filed under Continuous Cruisers. You can follow any responses to this entry through the RSS 2.0 feed. You can skip to the end and leave a response. Pinging is currently not allowed.