Following a Freedom of Information request by Allan Richards, CRT has published all the enforcement letters referred to in the continuous cruising enforcement flow chart that Mr Richards obtained in June shortly before its publication by CRT. We provide some explanation of the letters here. Mr Richards’ request for the letters was refused by CRT on the grounds that most of them were already in the public domain, even though CRT had not published them at the time of his original request.

This enforcement process replaces the previous Continuous Cruising Enforcement Processes that involved a series of letters, Pre-CC1 to CC3, leading to termination of a boat licence. There are some significant differences.

CRT is unlawfully imposing a minimum range of movement contrary to Section 17 3 c ii of the British Waterways Act 1995, which does not set a minimum distance or range required for compliance. CRT has stated that boats will not avoid enforcement unless they travel in a range of at least 15 to 20 miles, and that they normally expect the range to be greater than this. In other words, if your boat is sighted by CRT in two places at least 15 to 20 miles apart during your licence period, this may be sufficient to avoid enforcement.

The sanction of licence termination has been replaced by the sanction of refusal to renew for 12 months without a home mooring with a range of sanctions that increase in severity depending on the severity of the alleged non-compliance.

The clock is no longer being re-set when the licence is renewed in cases where the enforcement action does not reach the stage of serving a CC3 (the letter that terminated the licence in the old procedure). Instead, the threat of refusing to renew the licence is constantly hanging over the boater’s head. If the licence is renewed for less than 12 months, CRT appears to still be expecting boats to travel in a range of at least 15 to 20 miles during the shorter 3 or 6 month licence period.

The new procedure contains significantly fewer warnings to boaters that CRT consider their cruising pattern to be non-compliant. There is only one letter in the process that warns boaters who hold a 12-month licence of this, which is the MPR or mid-point reminder, which may be sent half way through the licence period.

Only one of these letters, the SWLA, acknowledges that the boater may live on their boat, and none of them make it clear that our rights under Articles 6 and 8 of the European Convention on Human Rights entitle liveaboards to due process, a fair trial and the right to defend themselves against action to remove their boat (Article 6) and to have the proportionality of the removal of their home decided by a Court (Article 8). This is despite the fact that during the transfer of BW to CRT in 2012, Waterways Minister Richard Benyon made an undertaking to Parliament that “CRT will not exercise its powers to remove a vessel that is thought to be someone’s home without first taking the matter to the county court and obtaining a declaration from the court that the removal is lawful”.

Some of the letters in this process are to be served by post only. This applies to the R6, R12, EL, MPR, RRa and RRb. This means that boaters may not find out for some considerable time whether CRT consider their boat movements to be compliant or not, depriving them of the opportunity to remedy the situation in time for the licence to be renewed for the full 12 months or at all.

Only one of the letters, EL, encloses any information about CRT’s sightings of your boat, and this does not include a full list of dates the boat was seen in any specific location.

The CC Monitoring Process Flow Chart gives guidance to CRT’s staff about what enforcement action to take in specific circumstances. You can download the flow chart here CC-monitoring-process-flowchart

Here is a brief explanation of each letter:

UNLIC1 is first letter to an unlicensed boat that has previously been licensed for 12 months where CRT has deemed that the licence can be renewed for a further 12 months, requiring the owner to license it.

MAC1 is the letter sent at the time of licence renewal asking the boater to confirm the home mooring location or whether the boat is ‘continuously cruising’, saying it is a condition of the licence to provide this information. This appears to be sent in order to pursue those who have stated they have a home mooring but CRT suspects they do not have one; such situations have been known to arise due to error on the part of CRT.

HMR3/ZE is the letter refusing to renew your licence for 12 months without a home mooring, restricting you to a 3 month licence unless you take a home mooring.

HMR6/ZE is the letter refusing to renew your licence for 12 months without a home mooring, restricting you to a 6 month licence unless you take a home mooring.

SWLA is a 28 day warning letter from Shoosmiths, CRT’s solicitors. It give the boater 28 days notice of service of Section 8, if a boat remains unlicensed following a refusal to renew the licence for 12 months. It gives the options of renewing without a home mooring for 3 or 6 months; renewing for 12 months with a home mooring, or removing the boat from CRT waterways. This is the only letter that acknowledges that the owner may live on the boat. It is sent by post or email and also delivered to the boat.

SNLA is the letter that serves the Section 8 where the boater has been given the option of renewing without a home mooring for only 3 or 6 months but has not renewed the licence (SN stands for Statutory Notices).

MPR is the letter 6 months into a 12-month licence stating that CRT believe your cruising pattern is not sufficient and you must travel further or more often.

RRa is letter half way into restricted licence informing you that CRT think you are complying and will renew for a longer term of either 6 or 12 months if you continue to comply.

RRb is the letter half way into restricted licence informing you that CRT think you are not complying and warning you of the consequences if you don’t improve your cruising pattern for the remainder of the licence.

EL is the letter informing you that your restricted licence has expired and CRT won’t renew it at all unless you get a home mooring. This is the only letter that includes CRT’s records of your boat movements and this only amounts to a map showing where your boat was sighted. It doesn’t include their detailed sighting records with dates and kilometre lengths.

SNLB is the alternative letter to SNLA for circumstances where a Section 8 is served when the boater has had a restricted licence which has come to an end, CRT deems their boat movements to be insufficient to renew the licence without a home mooring, and the boater has not been able to obtain a home mooring.

R6 is the letter that informs the boater that CRT will renew the licence for a further 6 months having forced the boater to renew for only 3 months.

R12 is the letter that informs the boater that CRT will renew the licence for 12 months having forced the boater to renew for only 6 months.

14 day warnings contain the text of alternative emails and texts to boats CRT consider have stayed longer than 14 days. They unlawfully refer to being moored in ‘the same general area’ or ‘the same locality’ or ‘the same stretch’ as opposed to the same ‘place’ which is the wording used in Section 17 3 c ii of the British Waterways Act 1995. They have different wording for London that refers to the increase in boat numbers in London. Some the statistics published by CRT about this alleged increase in boats in London are wildly exaggerated. Contrary to the law, these letters have been designed to be sent to both boats with and without home moorings, even though the 1995 Act only applies the 14-day rule to boats licensed under Section 17 3 c ii.

These 14 day ‘reminders’ are sent in cases where CRT does not have any record either of the boater needing to stay longer because it is reasonable in the circumstances or of the boater being entitled to reasonable adjustments to the enforcement process due to disability, pursuant to the Equality Act. The flow chart states that three ‘valid’ reminders in 3 months will trigger enforcement action.

These 14 day ‘reminders’ replace Patrol Notices. The 14 day ‘reminders’ fail to inform the recipient that the boater has 28 days to remedy the alleged default; Section 17(4)(c) of the British Waterways Act 1995 states “the Board may give notice requiring the holder of the relevant consent to remedy the default within such time as may be reasonable (not being less that 28 days)”.

ADV appears to be a circular designed to be sent to all boats without a home mooring, informing them of the enforcement process. It erroneously refers to a boat licensed without a home mooring as having a ‘continuous cruising licence’ and states that “This option of giving a three-month licence is only to be offered on renewals up until Oct 15 at the present moment in time”. This implies that after 15th October, boaters who CRT deems to be ‘hardly moving’ will not have their licences renewed at all without a home mooring.

The file properties of these documents show the close involvement of  CRT solicitors Shoosmiths and CRT Legal and Enforcement Departments in drawing up the new policy and writing the letters. 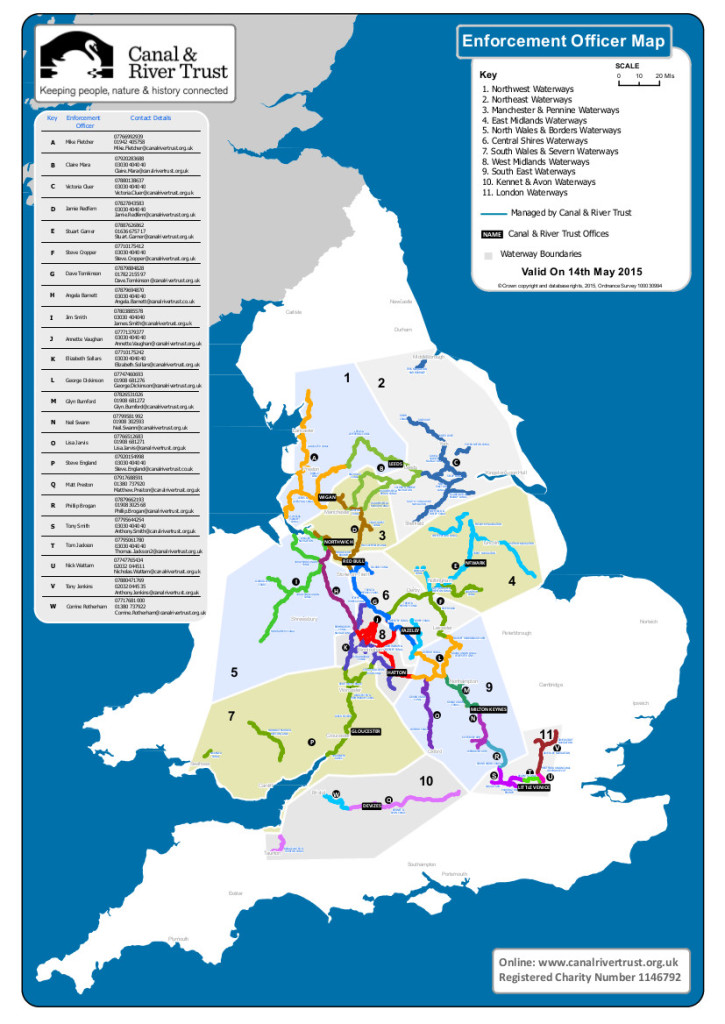 This entry was posted on Saturday, August 8th, 2015 at 5:30 pm and is filed under CRT Policy News, News. You can follow any responses to this entry through the RSS 2.0 feed. You can skip to the end and leave a response. Pinging is currently not allowed.