Liveaboard boaters from the K&A joined demonstrations outside CRT’s headquarters in Milton Keynes on 10th May where in total about 90  boat dwellers without home moorings protested against the charity’s punitive and unlawful enforcement action against boats without a home mooring. Some 15 boaters also protested at CRT’s licensing office in Leeds.

The right to use and live on a boat without a home mooring is enshrined in the British Waterways Act 1995. It is not within CRT’s legal powers to enforce its draconian policy, started in May 2015, that sets requirements that go beyond the 1995 Act. Yet the ‘charity’ has stated that it is very unlikely that a boater who travels within a range of less than 20 miles is complying with these ‘rules’. In addition boaters who have not travelled in a linear fashion but have turned round, for example to access services, have been threatened with eviction. Boaters who have travelled much more than 20 miles have still been served with enforcement notices, Section 8’s or have had their licences ‘restricted’ to 6 or 3 months. There is a strong correlation between boaters on ‘restricted’ licences and those with children at school. 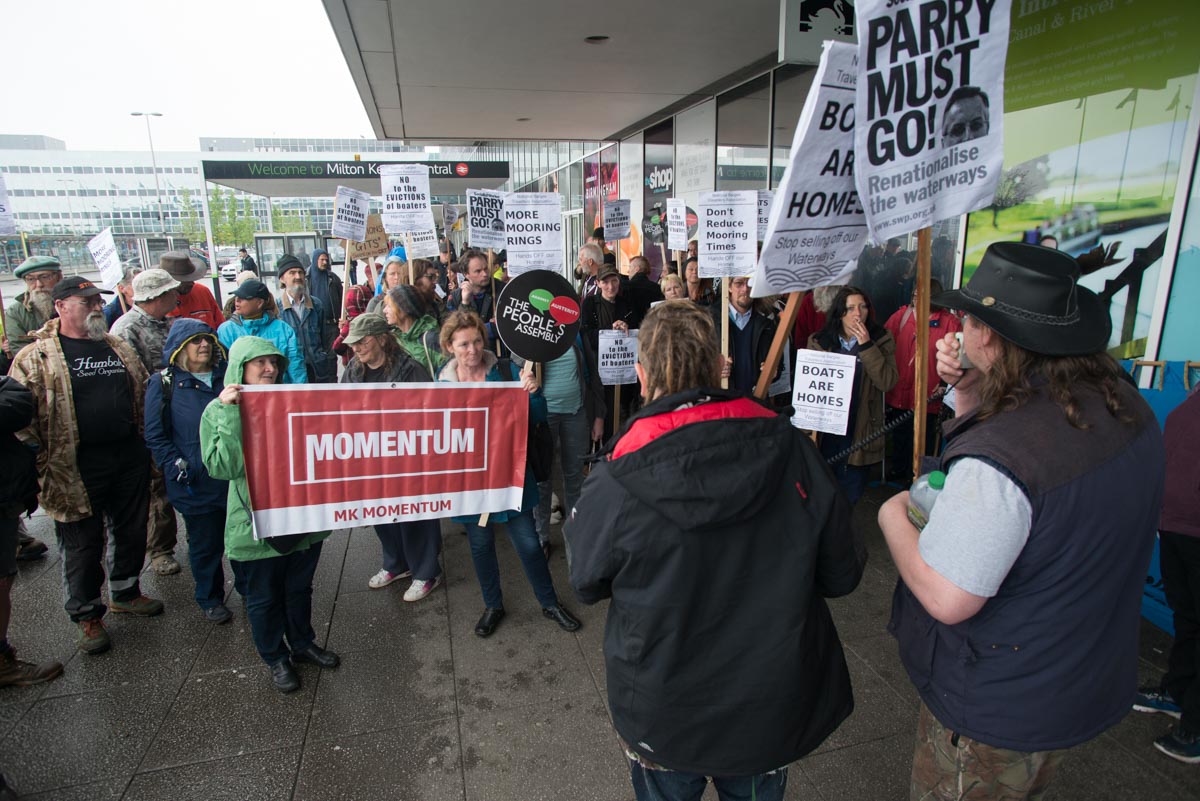 The protesters at Milton Keynes also handed in an open letter to CRT requesting an investigation into reports of Matthew Symonds referring to boat dwellers as ‘gits’.

Glyn Robbins, of the Unite union housing workers branch, stated the union’s support for the protest: “I fully support the campaign. Everyone’s entitled to decent, secure affordable housing, including Bargees. The behaviour of CRT is making this harder. Our canals and rivers should be treated as public property, open and available to all, regardless of income. In the midst of a housing crisis, CRT should be supporting Bargees who make a home on the water, not harassing them”. Many of CRT’s staff are members of Unite.

A spokesperson for the National Bargee Travellers Association, which organised the protests, said: “Since we were protesting at time when many of our community are at work, we are very pleased with the turn out. We hope that CRT will sit up and listen to our concerns. It is our homes that the Trust is interfering with and our campaign will not stop until CRT ends its punitive new policy.”.

“CRT doesn’t have the power to set a distance or specific pattern that we must travel. It deals with us inconsistently, refuses and restricts our licences without giving us clear reasons and threatens people with eviction. However, today we have shown that we will stand together. We will not let our community be picked off one by one. We are fighting for our homes and our way of life”.

This entry was posted on Thursday, May 12th, 2016 at 6:07 pm and is filed under News. You can follow any responses to this entry through the RSS 2.0 feed. You can skip to the end and leave a response. Pinging is currently not allowed.