A boater attended the BW Annual General Meeting in Birmingham on 2 December and put the following question to the question and answer panel.

“When will BW stop acting beyond its powers in carrying out enforcement that makes liveaboard boaters homeless, given that Nigel Johnson’s evidence in Bristol County Court on 23 September shows that such enforcement is unlawful?” END_OF_DOCUMENT_TOKEN_TO_BE_REPLACED

We are offering a prize for the best caption to this photo of BW Marketing Manager Simon Salem talking to a liveaboard boater at the National Association of Boat Owners AGM in November. Email your entry to info@boatingcommunity.org.uk or post it as a comment before 24 December 2010 and we’ll give the best caption the great prize of a free lifetime subscription to this web site. We already have one entry: “Who is this woman?” 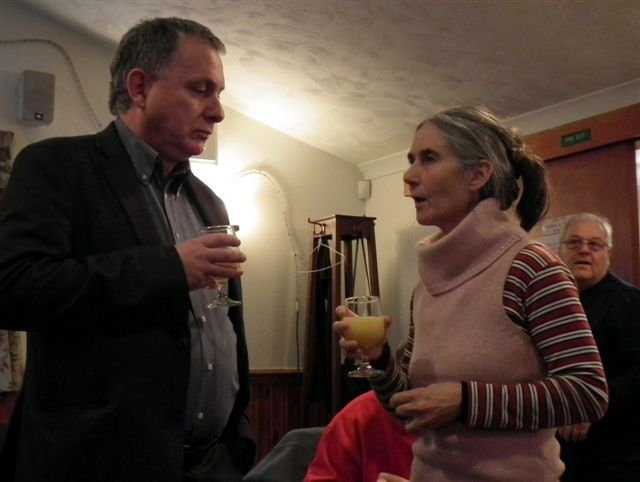 Get organised – BW to go ahead with local mooring strategies in other areas.

BW appears to be going ahead with local mooring strategies in other areas which it defines as ‘hotspots’ before the pilot local mooring strategy on the Kennet and Avon Canal has even been drawn up and implemented. As far as we know, these areas are the Lee and Stort, Birmingham, the Macclesfield Canal and the Southern Grand Union.

We have received this messsage from Peter Atwill on Gospel Belle:

The Carol Service at Dundas Basin on the 4th December at
6.00 is cancelled this year. The weather has beaten us, we cannot take the
chance of any one slipping and hurting themselves.

We really appreciate it if you could let any one else know you see who might
have been intending to go. Many Thanks.

We have received this message from a boater in the north west about BW’s unlawful enforcement practices:

British Waterways served an injunction on a boat at Nantwich earlier in the year.  The owner lived on the boat and had been refused a licence although offering to pay for one. He left it to the last minute to seek legal advice.  He didn’t turn up at court. An order was made to remove/seize his boat.  He was given 14 days notice. This notice was ignored on the grounds that he might ‘abscond’. Two BW ‘enforcers’ accompanied by two Polish ‘mercenaries’ dressed in BW uniforms came to his boat at 7-o-clock one morning when he wasn’t there. END_OF_DOCUMENT_TOKEN_TO_BE_REPLACED

The Kennet and Avon Canal Trust is holding one of its regular work parties on Saturday 5th December. Meet at the Trust’s cafe at Bradford lock at 10am. All are welcome. At the last work day the volunteers concentrated on gardening and tidying the area around the lock.

You are currently browsing the Kennet and Avon Boating Community Website archives for December 2010.