On the hottest day of the year, a bunch of liveboard boaters and local residents decided to do something about the growing mound of rubbish left at a popular swimming spot on the River Avon. Our correspondent Michelle writes:

At the bottom of Ferry Lane is a beautiful little spot called Warleigh Weir, which has always been a popular spot for swimming in the summer when it gets too hot. But in recent years this little spot has grown in popularity drawing more and more people from further afield.

Tony, a local resident, told me that it has always been busy in the summer, but he has never seen it as bad as in the last two years. As we spoke somebody cranked up a sound system and there were whoops and cheers from the 100 plus crowd gathered there. I asked him how he puts up with it and he shrugged. There isn’t much he can do. A few weeks ago people had trespassed into his back garden and stole a tender in broad daylight and he feels he has little hope of seeing that again. Tony’s 82 next week…

As has been seen by the aftermaths of many a festival (the village of Pilton after the Glasto is a perfect example of this), a thing which attracts crowds, also attracts rubbish. After a particularly busy week this month a large pile of rubbish had built up just on the other side of the railway tracks. Apparently it had started as a hippo bag placed by an unknown, but in the way of many piles of rubbish it out grew its container and sprawled out in the most hideous fashion.

A local walker known as Luna Bella shared a post about the sprawling heap and the rubbish strewn about the fields on Facebook; it was picked up by the Bath Chronicle who ran an article, which got shared enough times that it came to the attention of a few people willing to do something about it.

So on the longest day of the year a group of local residents and boaters (17 in total) turned up armed to the teeth with bin liners, gloves and litter pickers and rolled up their sleeves to tackle a heap that embodied a great wrong in our society. 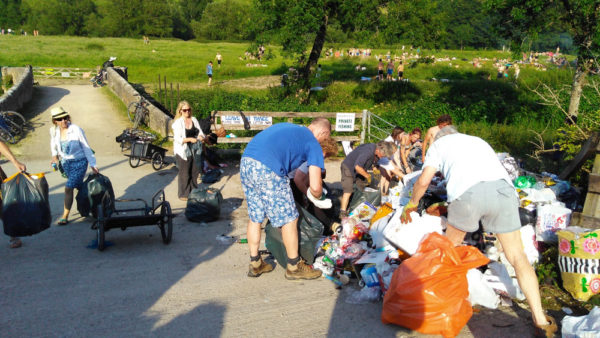 Michelle’s photo of the Warleigh clear-up

It took over two hundred bin liners and over an hour to bag and shift the heap from one side of the track to the other and in spite of the grossness of the task there was lots of laughter about who could find the best stuff.

We found raw and cooked meats, unopened packets of sandwiches, towels, shoes, cool boxes, disposable bbqs, beer cans, wine and cider bottles (many smashed), lilos, picnic blankets, socks and even a test for Chlamydia. The smell was atrocious and there were many squeals of disgust as unexpected bin juice spattered on feet hands and legs, but the band were determined and the heap was conquered.

A few of the swimmers were roped into the task as Tony thrust bins at them on the way past politely saying, “you’ve enjoyed our patch, can you help tidy it?”

Just a slight scar but the heap was vanquished.

I think that there was probably a bit of rubbish left at the weir last night as when I left, the party was still in full swing. I’ve been a boater for over twenty years now and during that time I’ve been called a number of things, but the worst to be levelled at me and I think the wider boating community is that we are somehow an environmental nuisance.

All of the boaters I know wouldn’t dream of dumping their rubbish in this fashion. Even if it does mean humping it a couple of kilometers down the towpath in all weathers to dispose of it responsibly, that is what they will do. To see this level of carelessness makes our hearts sink, but thankfully we have a will to tackle it and that restores my faith in humanity somewhat.

You can read the full story and much more on Michelle’s blog
https://boatspregnancyanduniversity.wordpress.com/2017/06/22/warleigh-waste/

The Government has been running a consultation on the use of red diesel, which opened in March 2017 and closes on 30th June 2017.

The consultation document gives a list of uses of red diesel which includes ships and private pleasure craft, but makes no mention of boat dwellers. If you think it is important that the Government fully recognises the use made of red diesel by liveaboard boaters, please respond. END_OF_DOCUMENT_TOKEN_TO_BE_REPLACED

The next meeting of the K&A Boaters Action Group will be on Monday 12th June, 7.30pm – 9pm at the Bridge Inn, Horton Rd, Devizes SN10 2JS. The meeting is mainly to discuss the CRT boat licensing review/ consultation. END_OF_DOCUMENT_TOKEN_TO_BE_REPLACED

You are currently browsing the Kennet and Avon Boating Community Website archives for June 2017.