Well, I guess it was predictable,  that Charley Dancey’s takeover of a piece of land in prime Bath city tourist area for his own personal grandstand would lead to action by the BANES Council. It was even more predictable when the party crew joined him.

As the river becomes more used by the boating community, it was obvious that elements within Bath’s ultra conservative ruling elite would not be best pleased by “these people” on “their river”.

And that has happened, but in a sweeping action that will see the stretch of river between Pulteney Weir and Widcombe Lock free of boats. The Active Lifestyles team of the Council has decided to rattle a few sabres at the boaters living an active lifestyle on this stretch of the river.

Possibly the most important and draconian action is the suspension of the moorings by the Sports Centre from next month. Although at the end of the leisure boating season, it is a well-used and world famous mooring for people visiting Bath. This is seen as a preemptive strike to prevent people living aboard here over the winter. 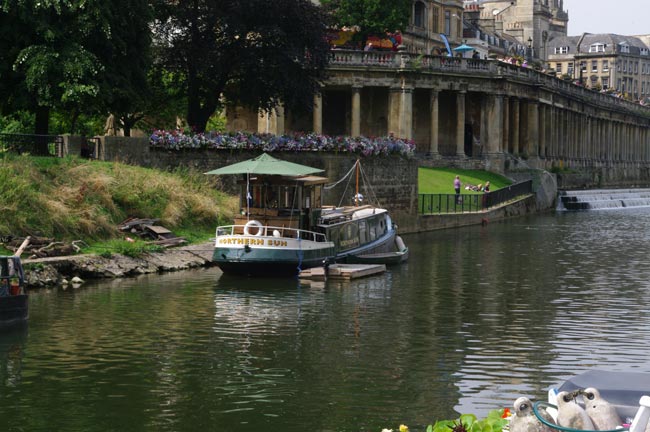 Lynda Deane of the  Sports and Action Lifestyles Team, oblivious to the irony, has issued the following statement;

There are currently unauthorised boats moored in the stretch of waterway between Pulteney Weir and Widcombe Basin.

Bath & North East Somerset Council has serious concerns about the presence of these unauthorised boats. This follows an investigation which discovered a range of possible issues which included the following:

In light of these concerns, the Council is requesting that the owners of these unauthorised boats move them immediately. Appropriate legal action will be taken if they fail to do so. The Council will take steps to ensure that the needs of occupants are taken into account as part of this process.

In recognition of the opportunities and potential of River Avon supporting the area’s regeneration, a plan will be developed by the Council to improve the riverside environment and make it more suitable for tourist boat and temporary moorings.

From Monday 14 October, the space for around six moorings in front of the recreation ground, which is the only permitted mooring area, will not be available for the public to moor. It is important that a plan is in place to ensure effective management of the entire river between Pulteney Weir and Widcombe Basin space between these locations prior to this stretch of waterway being made available for the public to moor their boats. Alternative moorings are available at Broad Quay and on the Kennet and Avon Canal.

As part of this plan, the Council anticipates that key facilities should be available, such as adequate supplies of water and electricity, and moorings introduced which are able to rise and fall with water levels. This temporary measure will help benefit the river users and the public in the long-term. 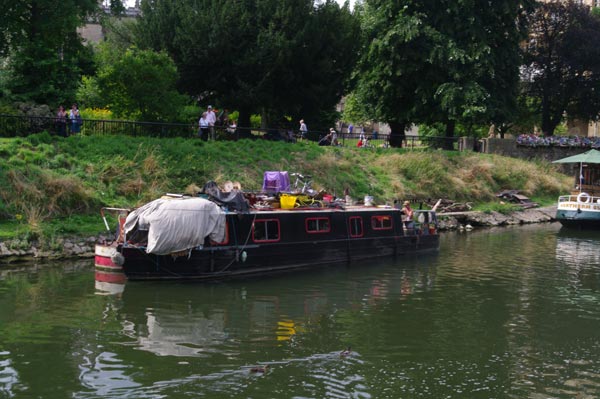 If you have anything to ask Ms Deane in clarification, or if you are affected by these measures contact Lynda Deane at lynda.deane@bathnes.gov.ukor through the Council switchboard on 01225 39 40 41

Whereas, of course, in an ideal world we would all be able to use all of the river but in these times of anti-liveaboard prejudice it would perhaps have been a little more circumspect to have kept a lower profile.

Dancey’s self-agrandisement has brought conflict to a bit of water where people have been living and working for years without attracting the ‘might’ of the council. As a result of this action it appears that all  boats will now be refused mooring on that stretch of river and those that are there forced to move. Many will, of course, be unable to enter BW waters without BSC,  insurance and BW licence.

A licence is not required to navigate that part of the river but the banks and bed are owned by the Council and, unless it can be shown a Right of Navigation exists they are perfectly entitled to refuse access to boats. Whether or not there is a Right of Navigation the council owns almost all the land on that part of the river and can prohibit mooring on the land that it owns. That it hasn’t enforced this for many years has enable boats to quietly moor on a bit of ‘free’ water.

it would appear that, whatever is happening, confrontation is inevitable and that the council will, probably successfully in the long term, imposed drastic strictures on the use of this part of river.

This entry was posted on Thursday, September 26th, 2013 at 6:04 pm and is filed under News. You can follow any responses to this entry through the RSS 2.0 feed. You can skip to the end and leave a response. Pinging is currently not allowed.