On Tuesday this week (7th June 2016) CRT seized Tanith from Claverton despite the fact that the boat had been sold to a new owner. Tanith is an ex-Navy storage tender, built by Tough Brothers of Teddington in 1960 of mahogany on an oak frame.

Tanith had been Section 8’d and had a Court Order dated February 2016 against her. Even though the previous owner had kept CRT fully informed of the progress of the sale, the boat was still seized. He had been trying to sell the boat for many months and had finally found a buyer. The previous owner tried to contact K&A Enforcement Supervisor Sheila Shaw as soon as he heard about the seizure, but Ms Shaw was conveniently unavailable. A complaint has been made.

Tanith was towed by CRT to Bradford on Avon marina and then craned out of the water onto a truck at about 3pm. She was seen on a low loader on the M4 around Chippenham being driven west at about 4.15pm. She is likely to have been taken to Sharpness Shipyard or Saul Junction Marina on the Gloucester and Sharpness canal. CRT is known to have taken other seized boats to Sharpness Shipyard or Saul Junction Marina including the historic Thomas Clayton wooden narrowboat Pearl belonging to Geoff Mayers, which CRT seized in 2014, and Woodford owned by David Hawkins that was seized in 2009 from the end of garden mooring at Seend Top Lock Cottage where the Kennet and Avon Canal Act 1794 should have entitled him to keep it. 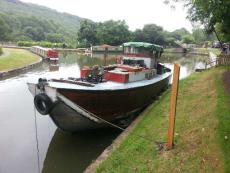 This entry was posted on Thursday, June 9th, 2016 at 1:32 pm and is filed under News. You can follow any responses to this entry through the RSS 2.0 feed. You can skip to the end and leave a response. Pinging is currently not allowed.