… is what at least 148 people think of the ongoing situation regarding refuse disposal for boaters on the K&A. Over the summer, boaters found it necessary to make complaints about the overflowing and unhygienic state of the bins at both Darlington Wharf and Dundas after the contractors paid by CRT failed to empty them. Bins at Devizes Wharf were removed some time ago following alleged fly-tipping by local residents. This happened despite complaints by boaters with moorings at Devizes Wharf, who requested that CRT should install a fence and a locked gate to prevent misuse. Bins in Hungerford were removed last year because of problems with access and CRT has not provided a replacement site. Now the bins at Honey Street have been removed. These bins were on land that isn’t owned by CRT, and for various reasons including fly-tipping, the landowner gave them notice to remove the bins.

The photograph below shows the appalling state of the bins at Dundas over this summer. 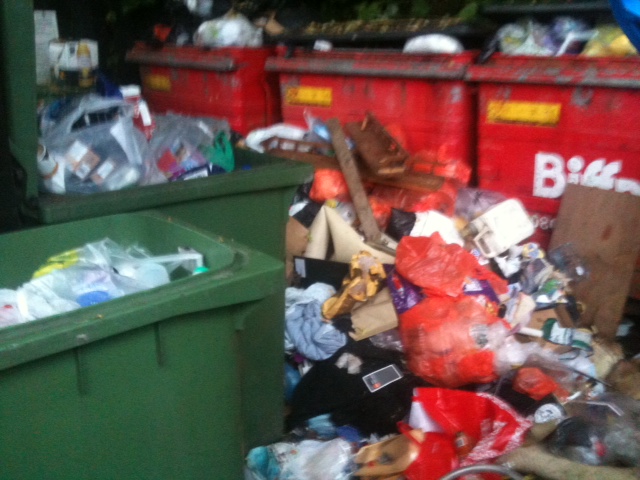 Some 148 people signed a petition condemning the loss of refuse disposal facilities at Honey Street and calling for CRT to provide a replacement site for these bins. This petition was sent to Mark Stephens, K&A Manager, with a complaint. The boaters who complained are cautiously optimistic following the initial response from Mr Stephens.

However, if you are concerned about the removal or the state of any or all of these facilities, please complain to CRT. Make sure you say that your letter is a complaint; say what you are complaining about, and tell them what you want them to do about it. Address your complaint to Mark Stephens, K&A Canal Manager, Canal & River Trust, The Locks, Bath Rd, Devizes SN10 1QR or email him at
mark.stephens@canalrivertrust.org.uk
and copy your email to enquiries.kennetavon@canalrivertrust.org.uk

This entry was posted on Thursday, December 12th, 2013 at 7:09 pm and is filed under News. You can follow any responses to this entry through the RSS 2.0 feed. You can skip to the end and leave a response. Pinging is currently not allowed.