BaNES Council presented its mooring trial and parking review for Mead Lane on the River Avon at the Saltford Parish Council meeting on 1st November. Signs were put up on 8th November and the ‘no mooring’ signs put up by the residents of Mead Lane removed. END_OF_DOCUMENT_TOKEN_TO_BE_REPLACED

The BaNES Water Space Partnership (BaNES Council, CRT, Environment Agency and Wessex Water) has commissioned a study looking at the use of the River Avon and the Kennet and Avon Canal within the BaNES area (Hanham to Dundas), and identifying ways in which facilities and services for waterway users can be improved.
See www.waterspacebath.org.uk

As part of this the company working on the project, Atkins, are hosting two focus groups in which representatives of different types of user will be asked to explore the issues they face in making use of the waterways. END_OF_DOCUMENT_TOKEN_TO_BE_REPLACED

A primary school head condemned CRT’s enforcement policy against boats without home moorings as “inhumane” because of its detrimental effect on boat children, in a meeting between CRT chief Richard Parry and local MP Michelle Donelan. END_OF_DOCUMENT_TOKEN_TO_BE_REPLACED

Nick Brown of NBTA met with CRT yesterday. This is his summary of that meeting.

“Meeting with CRT in MK: Head of Legal (Jackie Lewis), another of the Legal Team (Tom Deards), Head of Boating (Mike Grimes) and Matthew Symonds.

We are still mulling over the conclusions but suffice to say the meeting didn’t go well they conceded very little (if anything). END_OF_DOCUMENT_TOKEN_TO_BE_REPLACED

There will be a meeting on Tuesday 12th April, 7pm to 9pm, at the Cross Guns, Avoncliff BA15 2HB for all boaters without home moorings who have been put onto 3 or 6 month ‘restricted’ licences by CRT and for those who have been threatened with restriction or non-renewal of their licence. END_OF_DOCUMENT_TOKEN_TO_BE_REPLACED

On Tuesday 29th March at 7pm to 9pm at the Cross Guns, Avoncliff BA15 2HB, there will be a second meeting for any boaters who have been put onto ‘restricted’ 3 or 6 month licences by CRT, or whose licence renewal without a home mooring has been refused, or who are otherwise in the enforcement process. END_OF_DOCUMENT_TOKEN_TO_BE_REPLACED

Has CRT restricted your boat licence to 3 or 6 months? Come to this meeting, 15th March, Avoncliff!

There will be a meeting for boaters on ‘restricted’ licences on Tuesday 15th March 2016 at 6pm to 9pm at the Cross Guns pub, Avoncliff BA15 2HB. END_OF_DOCUMENT_TOKEN_TO_BE_REPLACED

CRT give clarification on distance required

Following from their recent letter to all boaters without a home mooring telling them they are expected to move ‘a certain distance’ without specifying that distance, some boaters have written to CRT seeking clarification about how far they should move. We are pleased to report that CRT have responded to those boaters with clear guidance. We reproduce their reply below; 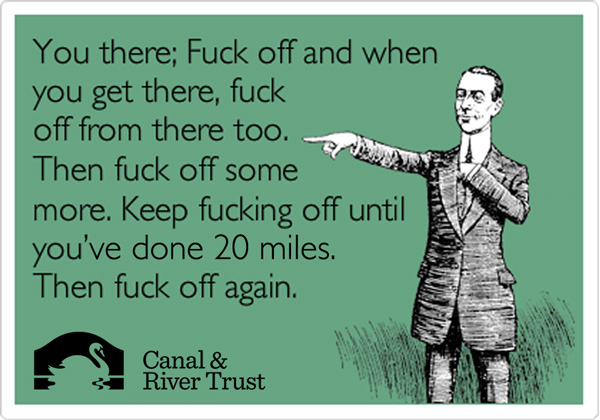 The number of boaters who have received enforcement letters from CRT even though they have “complied” with the K&A Interim 12-month Local Plan continues to rise. END_OF_DOCUMENT_TOKEN_TO_BE_REPLACED

Residents, boaters and CRT agreed last week that there was a case for making parts of Wilcot on the Long Pound a Quiet Mooring Zone. The Pewsey Canal Action Group’s second meeting on 2nd October 2014 concluded that there was no need for any 48-hour moorings in the village as there is always space for boats to moor. END_OF_DOCUMENT_TOKEN_TO_BE_REPLACED